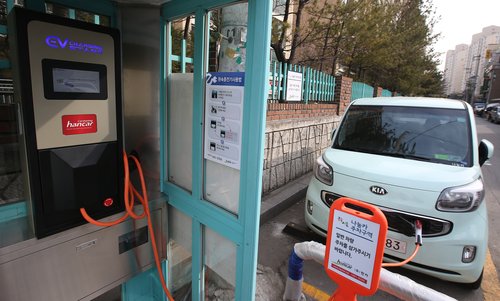 The Korean government will build a business platform for electric cars in Jeju for three years, and then expand the project nationwide. (image:Yonahap)

SEOUL, Feb. 14 (Korea Bizwire) – Jeju city, one of the Korean government’s model cities for electric cars, will establish 1,700 electric car charging stations this year via the foundation of a SPC of public and private enterprises, said the Ministry of Trade, Industry and Energy (MOTIE) on February 13 at the 13th National Energy Commission meeting.

The overall number of charging stations in Jeju is expected to reach 3,750 in 2017. The Korean government is also planning to supply 119 electric buses and 1,000 electric taxis and rental cars in Jeju before 2017.

The Korean government will build a business platform for electric cars in Jeju for three years, and then expand the project nationwide. The government also plans to lease batteries for taxis and buses, in order to reduce the upfront costs of operating electric vehicles.

Other than projects concerning electric vehicles, the government also revealed a lease project of solar panels for apartments, a project to expand energy town development, and a self-supporting energy platform project on Ulleung-do, an island off the east coast of the Korean peninsula.