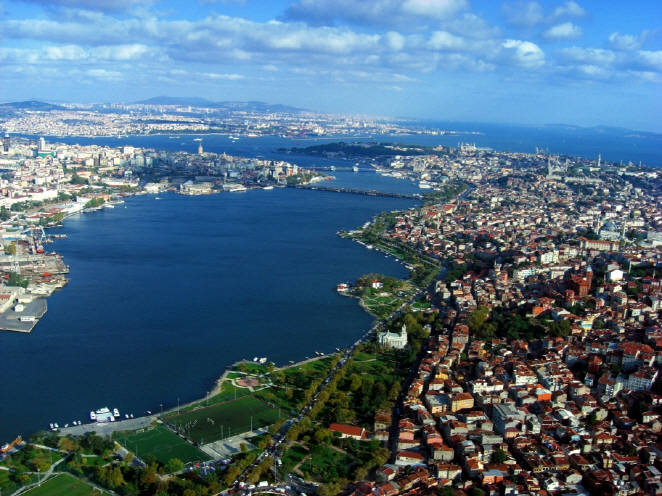 The Golden Horn, looking from upstream to downstream (i.e. from northwest to southeast), toward the Bosphorus. (image: Public Domain)

SEOUL, Nov. 16 (Korea Bizwire) — The Ministry of Transport and Infrastructure of Turkey announced that a canal project that has included Korean construction companies by request of Turkish President Recep Tayyip Erdoğan will be breaking ground next year.

In an interview with local Turkish media Anadolu Agency, Turkey’s transportation minister yesterday revealed that the Canal Istanbul project was set to start next year.

The minister emphasized that “the construction of the canal must not be postponed to 2020.”

The canal will connect the Black Sea with the Sea of Marmara requiring 10 bridges to be constructed in the process.

The canal is currently expected to be completed by 2023, which coincides with the 100th anniversary of Turkey’s establishment as a nation state.

The canal project is one of many “mega projects” that President Erdoğan has been pushing for, and is estimated to cost approximately 18 trillion won (US$ 8.83 billion).

Upon completion, Canal İstanbul will bisect the current European realm of Istanbul to form a separate piece of land between the continents of Asia and Europe, minimizing shipping traffic in the Bosporus Strait.

The Turkish government will be seeking revenue that comes from the tolls that ships must pay in order to go through the canal, while additionally profiting from the development projects set to initiate in the region.

The ecological protection of the wildlife that inhabits the Bosporus Strait was yet another reason for the initiation of the canal project.

During his visit to Korea in May, Erdoğan asked Korean construction companies to participate in the canal project, and many industry insiders showed keen interest in the invitation.

Of note, an official at SK Engineering & Construction Co., in an interview with Anadolu Agency that took place after President Erdoğan’s visit, expressed great interest in leading the canal project.

However, Erdoğan postponed the project in September in a bid to cut government spending sparked by a sudden fall in the Turkish currency, causing many critics to speculate on whether the canal project would be discontinued, a claim which was quickly denied by the Turkish government.