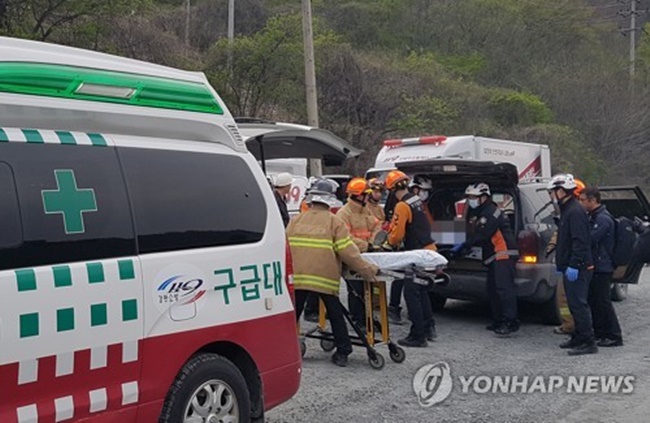 Rescue workers move a stretcher carrying a victim of a mine explosion onto an ambulance to transport him to a nearby hospital in Jeongson, Gangwon Province, on April 26, 2018. (Image: Yonhap)

JEONGSEON, South Korea, April 26 (Korea Bizwire) – Two people were killed and another went missing Thursday after an explosion at a mine in a northeastern county in Gangwon Province, authorities said.

The accident happened at around 3:55 p.m. when blasting work was under way in an iron mine in Jeongseon, about 150 kilometers east of Seoul.

Initial reports said 14 workers were buried under the rubble of rocks, but it was later confirmed that eight of them managed to escape quickly.

Of the six buried, two, including a 64-year-old surnamed Jin, have been confirmed dead and three others suffered light or serious injuries. The one remaining person, a 63-year-old surnamed Seo, is still unaccounted for.

The six workers had made their way about 5 kilometers into the mine to carry out blasting work when the accident occurred. Rescue operations are under way to search for the missing victim.