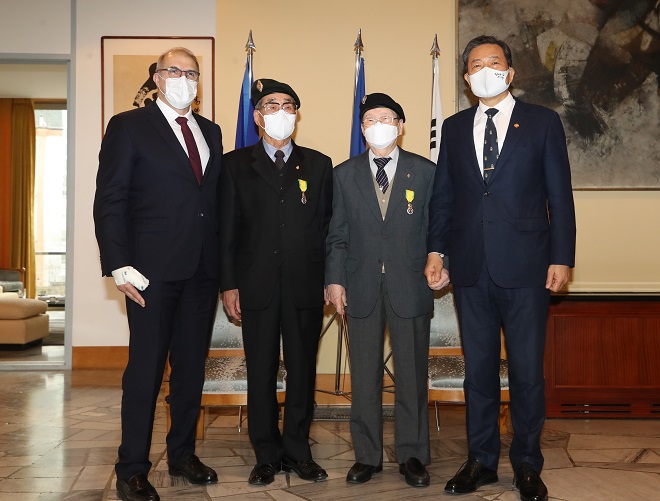 French Ambassador to South Korea Philippe Lefort (L) and South Korean veteran affairs minister Hwang Ki-chul (R) pose for a photo with Korean War veterans Park Dong-ha (2nd from L) and Park Mun-joon after awarding them with a military decoration from France at the French Embassy in Seoul on March 11, 2021. (Yonhap)

SEOUL, March 11 (Korea Bizwire) — Two South Korean veterans who fought during the 1950-53 Korean War in a French battalion of the United Nations forces were to receive a military decoration from France on Thursday, the veterans affairs ministry said.

French Ambassador to Seoul Philippe Lefort will deliver the decoration, called La Medaille Militaire, to Park Dong-ha, 93, and Park Mun-joon, 90, who fought alongside French troops in multiple battles on the Korean Peninsula during the war, according to the ministry.

The decoration is the highest medal of merit awarded to non-commissioned officers and enlisted service members in France.

“I appreciate the two veterans’ sacrifice and dedication, and also extend my gratitude to France for remembering South Korean troops and awarding this medal,” Veterans Affairs Minister Hwang Ki-chul said.

France dispatched 3,421 troops to support South Korea during the three-year war, which left 262 of them killed, 1,008 wounded and another seven missing.