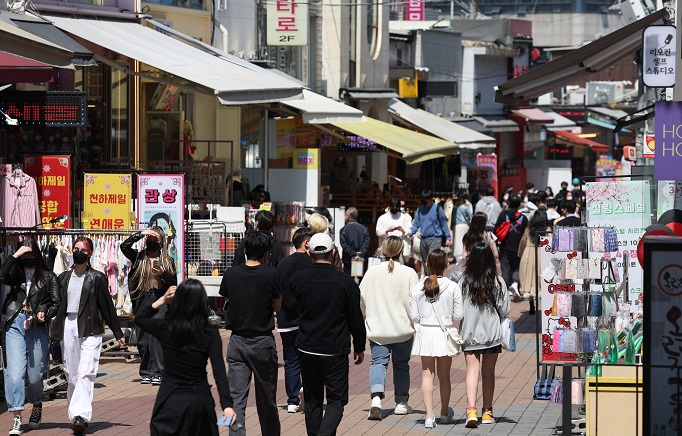 Citizens walk in the popular hangout spot of Hongdae, western Seoul, on April 16, 2022, as the government is set to lift almost all COVID-19 social distancing rules this week amid slowing infections. (Yonhap)

SEOUL, April 29 (Korea Bizwire) — One in five South Korean youths don’t believe that effort leads to success, having low regard for the country’s social fairness, a report showed Thursday.

A 2018 World Values Survey showed that 20.8 percent of 1,200 young adults between the ages of 16 and 24 did not believe that effort leads to success, according to a report by the Korea Institute of Public Administration.

While the standard age for determining young adults is different in the two surveys, it still shows how an increasing number of young adults now hold negative views about the country’s social fairness.

Such negative views have been expanding throughout all age groups in South Korea. The percentage of people who do not believe that effort leads to success grew from 9.5 percent in the 1990 survey to 14.1 percent in 2018.

“Growing levels of distrust and disintegration of social unity have led to the belief that society is unfair,” the report explained.

The Korea Social Integration Survey, conducted annually by the Korea Institute of Public Administration, showed that the share of respondents who said they have trust in other people dropped from 71.4 percent in 2013 to 44.9 percent in 2020.