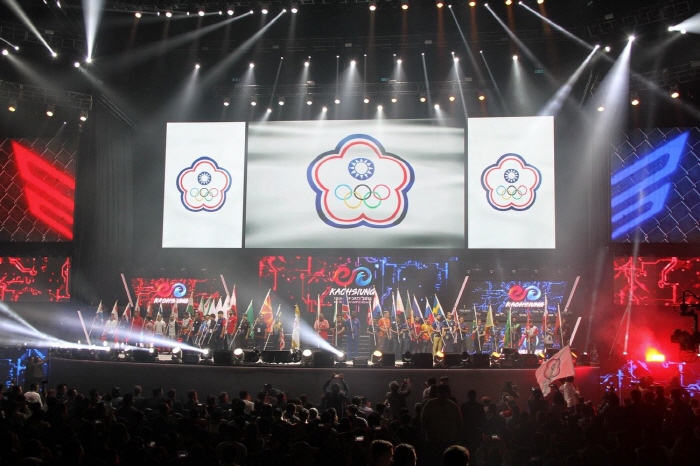 Acting Kaohsiung Mayor Hsu Li-ming thanked the host, Chinese Taipei Esports Association, and co-sponsors and supporting enterprises of the competition, which took place in Kaohsiung Arena until Nov.11. He also expressed appreciation to Chinese Taipei Olympic Committee and Olympic Council of Asia for sending representatives to the opening ceremony, which featured parade of players, sworn-in, and flag-hoisting.

Hsu hoped all guests and participants of the game would bring back home wonderful memories of Kaohsiung, and carve out together a glorious page in the world esports history.

Hsu said hosting the 2018 world esports competition pushed Taiwan a giant step forward in its globalization efforts. It created a platform for young people in the country to interact with video game enthusiasts in other parts of the world while widening Taiwan’s exposure to the industry.

Local video game fans are able to obtain knowledge, skills and training from courses and programs on esports offered by local vocational schools and universities, Hsu said. Having the championship held in Taiwan would inspire and encourage them to further tap into the esports world, added Hsu.

They would have the opportunities to learn from top players from around the world to observe management and marketing skills of the esports competition in such large scale, and to listen to first-hand analyses of commentators.

Hsu added that Kaohsiung won the honor to hold the Rift Rivals in 2017 for Asia, which paved the way for the metropolitan to host this year’s championship. Kaohsiung is leading other cities in Taiwan in efforts to build up the country’s strength and competitiveness in world esports, he said.

The players of the 2018 leSF 10th Esports World Championship competed in “League of Legends” , “CS:GO” and Tekken 7 in the three-day event.