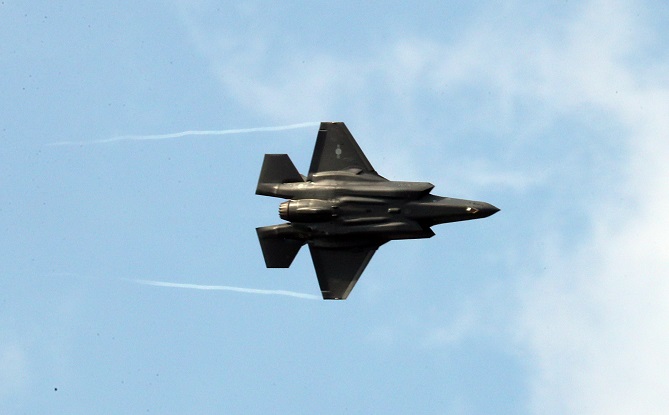 In this file photo, taken on March 4, 2020, an F-35A stealth fighter conducts a flying display during a commissioning ceremony at the Korea Air Force Academy in the central city of Cheongju. (Yonhap)

SEOUL, Oct. 20 (Korea Bizwire) — A total of 24 F-35A next-generation fighter jets have arrived in South Korea from the United States so far, the arms procurement agency said Tuesday, as Seoul pushes to enhance its operational capabilities against outside threats.

South Korea began bringing in the advanced stealth fighters from March last year to beef up air defense capabilities under a plan to deploy 40 units through next year.

“We experienced some delay in the delivery due to the COVID-19 situation, but through South Korea-U.S. coordination, the delivery has been normalized as planned,” the Defense Acquisition Program Administration said in a parliamentary audit report.

The agency said South Korea will complete the construction of facilities to store the planes by December.

As a centerpiece of the country’s strategic targeting scheme against potential enemy forces, the warplane is expected to boost operational capabilities and strengthen the readiness posture against threats from all directions, military officials said.