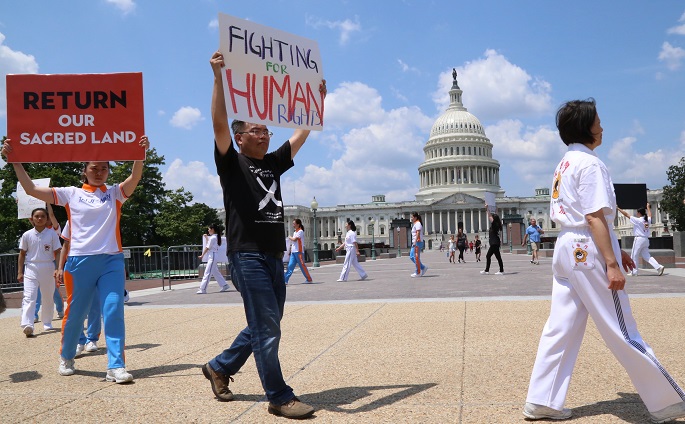 WASHINGTON, Aug. 2 (Korea Bizwire) — Twenty-one years ago, Tai Ji Men Qigong Academy presented a cultural performance on Capitol Hill and was praised as International Ambassadors of Peace and Goodwill. Twenty-one years later, they have returned to Washington, D.C. to seek justice and publicize their own experience of being religiously persecuted.

Recently, over 30 representatives of Action Alliance to Redress 1219 and Tai Ji Men Qigong Academy peacefully protested in D.C., including the Capitol Hill, after participating in the International Religious Freedom (IRF) Summit 2021. The protest signs they held read, “Stop the 24-Year Violation of Human Rights and Religious Freedom,” “Revealing the Truth of the Tai Ji Men Case,” “Return Our Sacred Land,” and “Fighting for Human Rights.”

Tai Ji Men Qigong Academy is a cultural and spiritual organization, with various chapters in Taiwan and the U.S. On March 22, 2000, at the invitation of Senator Jesse Helms, the then Chairman of the U.S. Senate Committee on Foreign Relations and witnessed by senators and House Representatives, Tai Ji Men presented a cultural performance in front of the Capitol building. D.C. Mayor Anthony Williams proclaimed March 22, 2000 as the Tai Ji Men Qigong Academy Day in Washington, D.C. and praised Tai Ji Men as International Ambassadors of Goodwill and Peace.

Over the past 20 plus years, Dr. Hong, Tao-Tze, the Grand Master of Tai Ji Men Qigong Academy, and his disciples have self-funded trips to over 300 cities in 101 nations and presented over 3,000 cultural performances to promote love, peace, and conscience. Tai Ji Men and Dr. Hong have received international recognition and acclaim for their peace efforts.

It is hard to imagine that such an organization has been persecuted in Taiwan for 24 years. In 1996, after the first direct presidential election, the Taiwanese government launched a political purge, targeting religious and spiritual groups that did not show support for the president in power during the election. Although Tai Ji Men took no political stance, it was caught in the crossfire and was persecuted through both legal and taxation measures.

This group of protesters also demonstrated in front of the U.S. Supreme Court. Ann Chen, a dual licensed attorney in California and Taiwan, stated, “In 2007, Taiwan’s Supreme Court found Dr. Hong and his co-defendants not guilty of tax evasion or any other charges and ruled that the red envelopes were gifts, and thus were tax-exempt income and not subject to business tax. However, the taxation bureau disregarded the court decision and continued to issue unjustified tax bills to Dr. Hong.” “Here in front of the Supreme Court, the final arbitrator of the law, we are revealing something absurd and tragic: The Taiwanese taxation bureau disregarded the final decision of its country’s Supreme Court,” said Ann Chen with a heavy heart.

During a 2010 public hearing in the Legislative Yuan, Taiwan’s Ministry of Finance openly agreed to end the unjust Tai Ji Men case within two months. In 2012, per the resolution of an inter-ministerial meeting held by the Executive Yuan, a public survey was conducted by the taxation bureau, and 7401 respondents all issued written statements indicating that their red envelopes to Dr. Hong were gifts, which was consistent with the Supreme Court’s decision, and proved once again that Dr. Hong and Tai Ji Men did not owe any tax.

However, the taxation bureau broke its promise, disregarded the evidence, ignored the resolution of the inter-ministerial meeting, disobeyed the Supreme Court’s decision, and continued to impose unlawful taxes on Dr. Hong. Based on an unjustified tax bill for the year 1992, Tai Ji Men’s sacred land was illegally auctioned and nationalized by the Taiwanese government on August 21, 2020. This has violated the religious freedom of Tai Ji Men’s master and disciples, forcing thousands of people to protest on the streets.

In response to the injustices against Tai Ji Men, many scholars and tax experts have voiced their support for Tai Ji Men. Kenneth Jacobsen, professor of law at Temple University and former advisor to President Bill Clinton, said, “It is the most gross deprivation of due process, the most gross violation of fairness, the most gross intrusion on religious liberty.”

“Tax weapons have been often used to discriminate against religious and spiritual minorities. This is becoming a global problem, and one the human rights community should be aware of,” warned CAP-LC (Coordination des Associations et des Particuliers pour la Liberté de Conscience), an NGO with special consultative status at United Nations’ ECOSOC that filed a written statement about the Tai Ji Men case and other unjust cases with the 47th Session of the UN’s Human Rights Council, published on June 21, 2021.

“Our demands are simple: The Taiwanese government should return the confiscated land to Tai Ji Men and clear its name,” said Duncan Lee, chairperson of Action Alliance to Redress 1219 and a certified public accountant in California.

The right to freedom of religion or belief is a fundamental human right. Former U.S. Ambassador-at-large for International Religious Freedom Sam Brownback, co-chair of the IRF Summit 2021, emphasized during Action Alliance to Redress 1219’s side event of the IRF Summit, “We believe governments’ role is to protect that innate right of a person to select their own course of future for their soul.” Dr. Katrina Lantos Swett, the other co-chair of the IRF Summit 2021 and president of the Lantos Foundation for Human Rights and Justice, when interviewed by members of Action Alliance to Redress 1219 about the Tai Ji Men case during the Summit, said, “It’s a case I’m still in the process of educating myself about. But I understand a growing consensus among people who have looked at it that an injustice has occurred. And we need to look at it and we need to address it.”

About Action Alliance to Redress 1219: Action Alliance to Redress 1219 is a group of international and Taiwanese legal, religious, and human rights specialists working to restore the truth about the ongoing persecution of Tai Ji Men in Taiwan by a small group of bureaucrats that has lasted for 24 years, as well as their misuse of authority and violations of the law. In addition to rectifying the Tai Ji Men case and revealing the truth, it is also committed to defending religious freedom, speaking out for related injustices in Taiwan. The Alliance calls on those in power not to ignore people’s fundamental human rights and demands that perpetrators be held accountable to protect democracy, the rule of law, and justice.

A photo accompanying this announcement is available at https://www.globenewswire.com/NewsRoom/AttachmentNg/a6a3d6cb-a183-4658-931d-e5caca846848