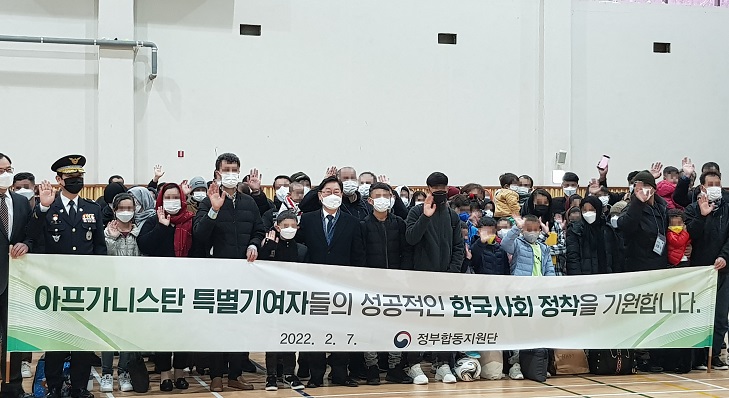 This photo, provided by the Ministry of Justice on Feb. 7, 2022, shows Justice Minister Park Beom-kye and Afghan evacuees taking a picture before leaving the temporary evacuee residence in the southwestern city of Yeosu.

The newly hired and their family members, totaling 157 people from 29 households, will move into company housing provided by Hyundai Heavy in Ulsan, about 415 kilometers southeast of Seoul, according to the justice ministry.

They are among 391 Afghan co-workers and their family members that South Korea evacuated from their home country when it was taken over by the Taliban last year for fear they could be persecuted for having supported foreign operations.

Except for one household that left for the United States with a special immigration visa, a total of 78 households have been staying at the temporary residence in the southern city of Yeosu and undergoing various assimilation programs, including Korean culture, language and economy lessons.

Of the total, 349 people from 71 households have now relocated to other cities in the country, including Incheon, Ulsan and Gimpo, as they found ways to settle down here.