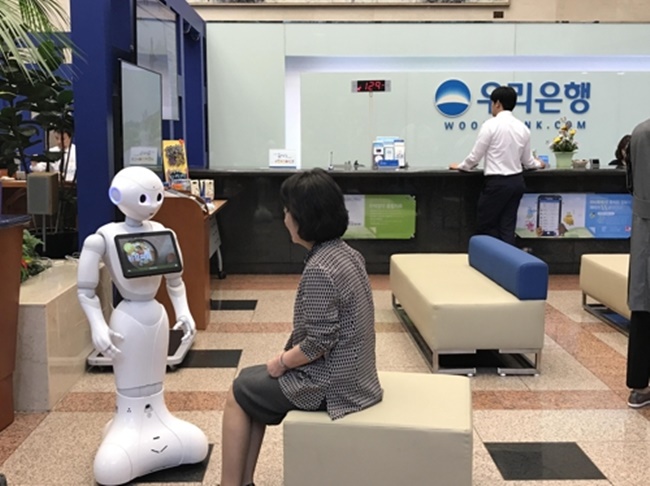 According to the report released by the Hyundai Research Institute on Tuesday, nearly 760,000 jobs in the financial sector could be replaced with computers, accounting for nearly 80 percent of finance jobs. (Image: Yonhap)

SEOUL, Nov. 29 (Korea Bizwire) – A new report has revealed over 75 percent of jobs in finance could evaporate when the fourth industrial revolution takes off in South Korea.

According to the report released by the Hyundai Research Institute on Tuesday, nearly 760,000 jobs in the financial sector could be replaced with computers, accounting for nearly 80 percent of finance jobs.

The report also shed light on a decline in the number of workers in the banking sector in recent years, while calling for educational reforms to better prepare for the upcoming industrial change.

Women and young people were found to be most vulnerable, with over 9 in 10 female workers in the finance sector having a high-risk job, while the figure was estimated at 66.6 percent for men.

The figure for those aged between 15 and 29 with high risk jobs stood at 84 percent.

Despite the worrying figures, however, the report pointed to a lack of preparation to cushion against the potential damage that could be caused by the fourth industrial revolution, particularly where investment, law and policy were concerned.

South Korea trails behind the U.S. and Japan when it comes to technologies closely associated with the fourth industrial revolution including network convergence, artificial intelligence, big data and information security.

The South Korean financial industry spent $5 million on research and development, while the U.S. spent $4.1 billion, a whopping 800 times more, while the U.K. spent $500 million.

A lack of protection of personal information has been diagnosed as a weakness by the report, as more than 1,500 accidents in the electronic financial industry have been reported over the last five years.

“A re-education system that tackles vulnerable jobs needs to be established to move labor force in risky fields of work to high value-added businesses. From AI and big data to fintech, the government needs a long-term training policy to secure technological competence,” the report said.

The report also added safety and security should be at the top of the priority list, while pursuing a progressive paradigm for financial regulations.