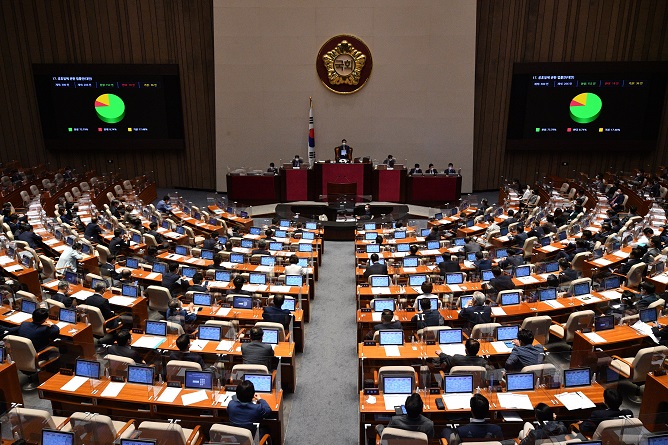 This photo shows a plenary session of the National Assembly in Seoul on June 29, 2021. (Yonhap)

SEOUL, June 29 (Korea Bizwire) – The National Assembly on Tuesday approved legislation to increase alternative statutory holidays by designating a substitute holiday for all public holidays that fall on weekends.

The alternative holiday bill passed the assembly’s plenary session, enabling the designation of official substitute holidays for all public holidays that happen to coincide with weekends.

Previously, alternative statutory holidays were allowed only for the Chuseok fall harvest holiday, Lunar New Year’s Day and Children’s Day in May in the case they fall on weekends.

The new bill stipulates that the first weekday following a public holiday that falls on a weekend should be designated as an alternative holiday.

The substitute holiday bill has been promoted by the ruling Democratic Party as part of efforts to reduce South Koreans’ working hours, known as the second longest in the OECD bloc, and boost domestic consumption.

An opinion poll released earlier this month also showed 7 out of every 10 South Koreans are in favor of expanding alternative holidays.

Exceptionally, however, the new bill will not be applied to workplaces with fewer than five employees, which are not required by law to give paid leave.

The bill is expected to take effect immediately so that the first alternative holiday under the legislation can be set for the upcoming Aug. 15 National Liberation Day, which falls on Sunday this year.

For the rest of the year, three more national holidays that fall on weekends — National Foundation Day, Hangeul Day and Christmas — will be given alternative holidays.