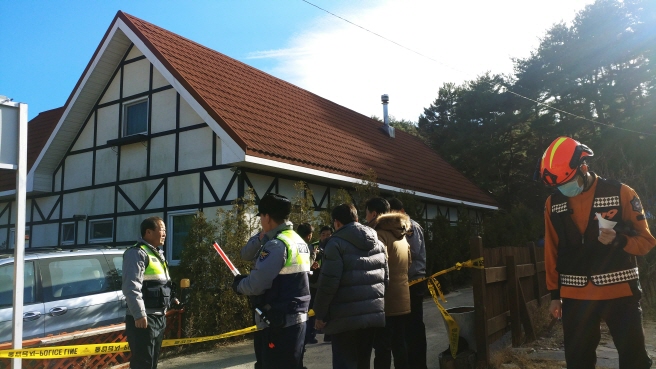 Firefighters and police investigators gather at a pension in the city of Gangneung on South Korea’s east coast on Dec. 18, 2018, where yellow police tape surrounds the scene where three students were found dead and seven others unconscious. (Yonhap)

The owner of the pension, located in the city of Gangneung on South Korea’s east coast, found the 10 people around 1:12 p.m. Police said the students were vomiting and foaming at the mouth.

The living room and other rooms at the pension where they were staying contained high concentrations of carbon monoxide, police said.

According to firefighters, levels of carbon monoxide concentration were detected at 155 parts per million (ppm) at the scene, well above the standard 20 ppm.

Police said they found the gas boiler at the pension disconnected from the ventilation pipe, leading them to believe that poor ventilation might have caused the incident. Police also said they didn’t see any device in the pension to detect gas leaks.

Police said they’ll continue to explore all kinds of possibilities. And Lee Jin-ho, head of the Gangneung Fire Station, told reporters, “We are treating this as an accident, not a suicide or a murder.”

The students, all of whom are males who attend Daeseong High School in Seoul, were on an excursion after finishing the state-administrated scholastic aptitude test for university entrance.

Of the seven injured, five are being treated at Gangneung Asan Hospital in Gangneung. The other two, said to be in critical condition, were transferred to Wonju Severance Christian Hospital in Wonju, about 120 kilometers west of Gangneung, for hyperbaric oxygen treatment.

Kang Hee-dong, director of Gangneung Asan’s Regional Emergency Medical Center, said one of the five students there improved to the point where he said his name.

“The patients aren’t unconscious, but they’re not conscious enough to have conversations,” Kang said. “At this point, they don’t appear to be in critical condition, but we’ll have to keep our eye out for complications.”

Kang said the carboxyhemoglobin (COHb) levels of the five students were between 25 and 45 percent. The normal level is under 3 percent, while smokers may have levels of about 5 percent.

They made reservations at the holiday property with their parents’ consent and arrived at the pension around 4:00 p.m. the previous day. The high school had reported the group’s trip to Gangneung to the Seoul Metropolitan Office of Education.