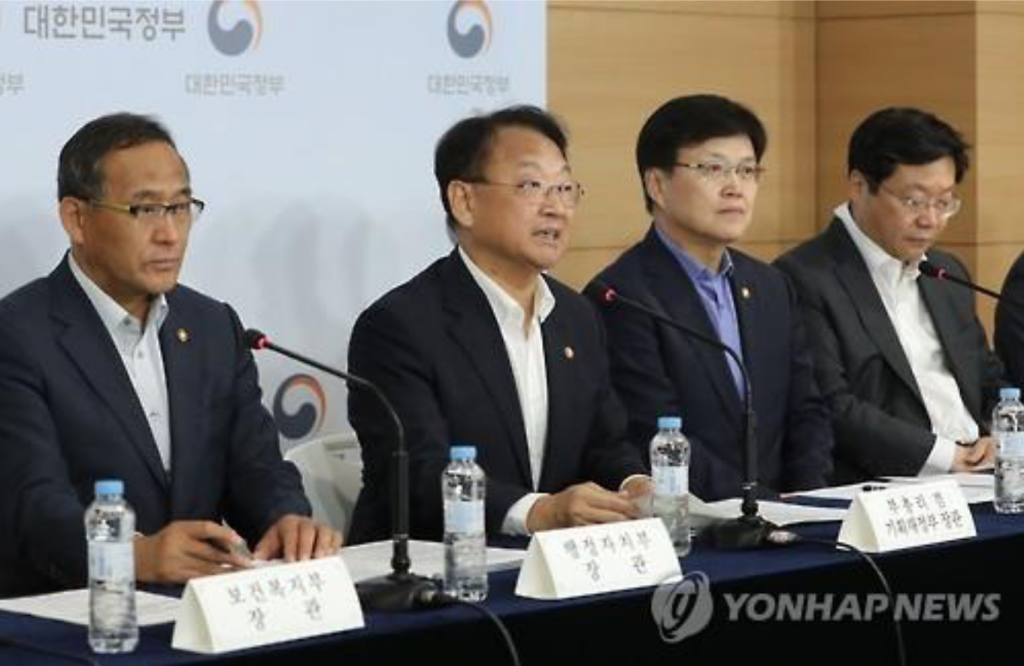 Finance Minister Yoo Il-ho (2nd from L) speaks at the official press conference on the 2017 budget proposal in Seoul on Aug. 30, 2016. (image: Yonhap)

SEJONG, Aug. 30 (Korea Bizwire) – The South Korean government aims for a 3.7 percent increase in its spending next year to push the annual budget above the 400 trillion won (US$358 billion) mark for the first time, with steep rises planned for youth job creation, expansion of custom-made welfare benefits and stabilization of public livelihoods, the finance ministry said Tuesday.

The proposed 2017 budget calls for boosting spending on job creation, education, defense, and culture and tourism by 10.7 percent, 6.1 percent, 4 percent and 6.9 percent, respectively, as the government will reinforce its bid to jump-start Asia’s fourth-largest economy suffering from faltering exports and flaccid domestic demand.

“The government will put job creation on the front burner in managing the budget, reorganizing the employment-boosting projects as a whole,” Finance Minister Yoo Il-ho said during a press conference in Seoul. “The proposal is designed to expand tailored welfare benefits to the socially needy and increase investment to cope with a low birth trend and an aging population.”

South Korea’s total fertility rate, or the average number of babies that a woman is projected to have during her lifetime, reached 1.24 in 2015. It marked the second-lowest fertility rate among members of the Organization for Economic Cooperation and Development. At the same time, 13.1 percent of South Korea’s population of 50.62 million was 65 or older in 2015.

The South Korean government has been encouraging its people to have more children by offering various incentives, including cash rewards. The chronically low birthrate and aging population are feared to hurt Asia’s fourth-largest economy by reducing the workforce and driving up welfare costs.

The government will ask the National Assembly to approve 400.7 trillion won in spending for 2017, up from 386.4 trillion won assigned for this year, according to the Ministry of Strategy and Finance. The amount is some 5 trillion won more than what was initially planned.

The budget proposal, which was endorsed at a Cabinet meeting on Tuesday, will be submitted to the parliament by Friday, which is required to pass the bill by Dec. 2 under the Constitution.

Concerns are high that the economic recovery might lose its momentum down the road due to slumping exports and lukewarm domestic demand, which are feared to drag down the country into a low growth cycle.

South Korea’s gross domestic product (GDP) grew 0.7 percent in the second quarter from three months earlier, staying below the 1 percent line for the second consecutive quarter. Exports, a key economic engine, plunged 10.2 percent in July from a year earlier, extending their losing streak to a record 19th consecutive month since January 2015. Consumer spending and retail sales recovered slightly but have not been enough to fully offset the slump in exports.

Against this backdrop, the finance ministry forecast that the South Korean economy will expand 2.8 percent on-year in 2016, down 0.3 percent from its earlier estimate of 3.1 percent and grow 3 percent in 2017.

Finance Minister Yoo Il-ho has been emphasizing the importance of the government’s role in propping up the sluggish recovery by injecting more money into the real economy.

“The government drew up supplementary budgets to stimulate the economy last year and this year,” Vice Finance Minister Song Eon-seog said in a prior briefing. “The 2017 budget is focused on creating jobs, regaining growth momentum and securing a new growth engine.”

As a result, a large bulk of the spending was allocated to the health, welfare and labor sectors, for which about 130 trillion won will be set aside. In particular, 17.5 trillion won was earmarked for job creation projects, with 29.6 billion won for free influenza vaccinations for all children under 59 months old.

The requested budget for education and national defense was increased 6.1 percent and 4 percent to 56.4 trillion won and 40.3 trillion won, respectively. It included a plan to spend 39.9 billion won on installing air conditioning systems in all military barracks.

For the culture, sports and tourism areas, the government will spend 7.1 trillion won, up 6.9 percent, as part of its efforts to prepare for the upcoming 2018 PyeongChang Winter Olympics.

It also asked for 19.4 trillion won and 18 trillion won to be spent on research and development, and public safety, respectively.

Despite gains in such areas, the government plans to cut its spending on social overhead capital by 8.2 percent to 21.8 trillion won, for the sake of promoting fiscal budget efficiency, according to the finance ministry.

The budget related to inter-Korean affairs and unification will also decrease by 1.5 percent to 4.6 trillion won, due to the closure of the Kaesong Industrial Complex.

The government expects to collect 414.5 trillion won, up 6 percent, next year, including 241.8 trillion won in national taxes. Income taxes are predicted to rise 3.1 percent and corporate taxes will likely advance 5.1 percent, with value added taxes and tariffs gaining 3 percent and 8.4 percent, respectively.

The finance ministry said it also considers maintaining sound fiscal status in a longer term in order to deal with the national finances more effectively.

“The fiscal spending has been managed in a more expansionary way,” said Vice Finance Minister Song. “At the same time, however, fiscal effectiveness and debt management are also important. We are managing the debt in a tight way.”

To cover the spending hike for next year, the ministry said it plans to issue about 28 trillion won worth of state bonds next year.

The fiscal deficit is estimated to mark 1.7 percent of the country’s GDP next year, down 0.3 percentage point from a year earlier, while the national debt-GDP ratio will fall 0.6 percentage point to 40.4 percent in 2017.

It will reduce the fiscal deficit to GDP ratio to 1 percent by 2020 and keep the national debt at 40.7 percent of the GDP in the coming four years.