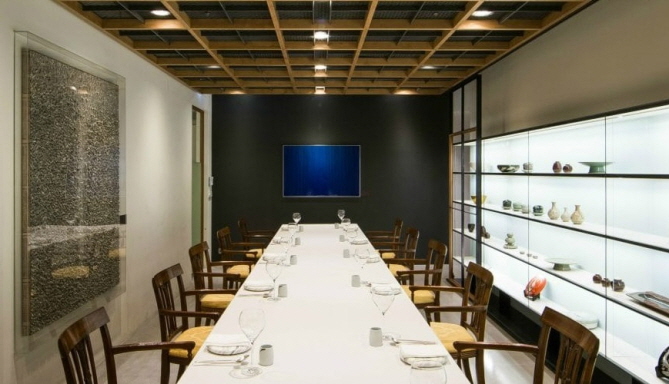 SEOUL, Nov. 14 (Korea Bizwire) — The Michelin Guide on Thursday announced its highly regarded star selections for a total of 31 restaurants in Seoul with unique cuisine and quality, including two eateries that grabbed three stars for the fourth consecutive year.

The awards were announced at the ceremony of the 2020 Michelin Guide for Seoul, featuring a total of 179 Seoul restaurants for the latest edition.

The figure marks a fall from 191 a year earlier. It is the fourth edition of the guide for the capital city.

Gaon, operated by the ceramic maker Kwangjuyo Group, is a fine dining restaurant committed to promoting a better understanding of Korean food around the world.

Traditional Korean food and wine pairings elevate the dining experience at the restaurant.

Two restaurants — Mosu and L’Impression — were newly added to the latest edition ranked at two stars each, joining five others such as Mingles and All Prima, it said.

Mosu, previously a star-awarded restaurant in San Francisco, is headed by Chef Ahn Sung-jae, who moved his Mosu to Seoul and received one star in the 2019 version.

L’Impression, a modern French restaurant located in southern Seoul, made its first appearance on the list.

Chef Seo Hyeon-min, with his years of experience in New York’s finest French kitchens, presents dishes that are also inspired by Korean tradition.

The guide lists a total of 22 one-starred restaurants, of which seven are new. These new additions highlight the dynamism and diversity of Seoul’s gastronomic scene

“Once again this year, our inspectors have discovered new gourmet establishments that perfectly illustrate the potential and dynamism of the city and pay tribute to Korean flavors,” Gwendal Poullennec, international director of Michelin Guide, said.

In addition, the company also selected a total of 60 Bib Gourmand restaurants, down from 61 a year earlier.

Among them, four are newly awarded, with each reflecting the diversity of the local cuisine that the inspectors discovered by searching the streets of Seoul.

The Bib Gourmand distinction is given by inspectors to establishments offering a quality menu for a maximum of 35,000 won (US$30).

The guide, published by the French tiremaker, bestows three stars to dining places offering exceptional cuisine worth a special journey, and gives two stars to restaurants worth a detour for excellent cuisine.