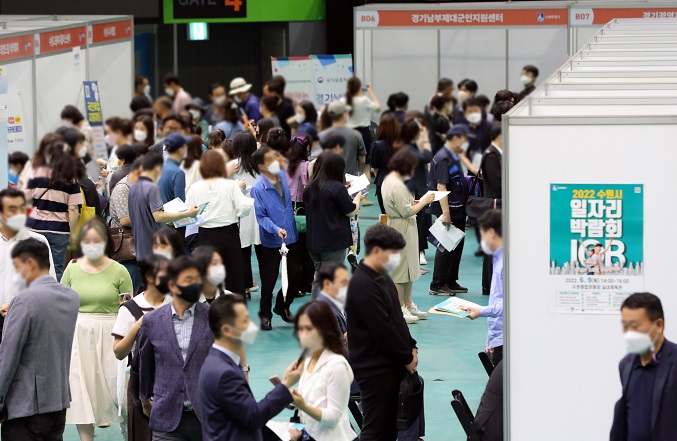 In this file photo, job seekers look at employment information at a job fair in Suwon, south of Seoul, on June 9, 2022. (Yonhap)

Among South Koreans between 15 and 29 years of age with employment experience after graduation, some 358,000 people had taken more than three years to get their first job as of May of this year, up by 35,000 people from last year according to the data from Statistics Korea.

Including those who took between two and three years to get hired (275,000), there were 633,000 people who took more than two years to get their first job.

Based on wage labor data, the roughly 4 million young South Koreans with employment experience took an average of 10.8 months to get their first job.

A considerable number of young South Koreans failed to get a job, spending time without properly preparing for employment.

There were 84,000 people categorized as so-called not in education, employment or training (NEET) who had spent more than three years without a job.

Expanding the category of “young South Koreans” to include those up to 34 years old, the number of NEET people jumped to 126,000 people.