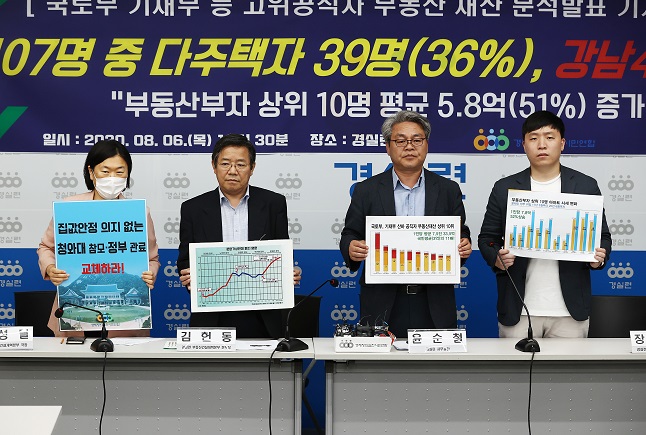 Members of the Citizens’ Coalition for Economic Justice hold a news conference in Seoul on Aug. 6, 2020, to disclose homeownership data for ranking government officials. (Yonhap)

SEOUL, Aug. 6 (Korea Bizwire) — Four in 10 high-ranking officials at the government’s ministries and institutions involved in the formulation of real estate and financial market policies are multiple homeowners, a civic group revealed Thursday, raising concerns about a possible conflict between their official duties and private interests.

According to the Citizens’ Coalition for Economic Justice (CCEJ), a leading progressive civic group, 39 of 107 senior officials, or 36 percent, above Grade 1 at the Ministry of Land, Infrastructure and Transport; the Ministry of Economy and Finance; the Financial Services Commission; the Bank of Korea (BOK); and real estate-related public corporations own two or more homes.

The CCEJ made the revelation based on public officials’ assets disclosed in March this year, while ranking civil servants have recently come under growing pressure to sell off their second homes in line with the government’s campaign to cool the real estate market.

Of the 107 high-ranking officials, seven were found to own more than three houses, the CCEJ said, whereas eight, or 7 percent, didn’t own any homes under their or their spouses’ name.

Those who own more than three homes include Jang Ho-hyun, an auditor of the BOK; Kim Chae-kyu, who retired in April as an assistant land minister; Korea Investment Corp. CEO Choi Hee-nam; and Chae Kyu-ha, who retired in January as the Fair Trade Commission’s secretary-general, the civic group said, noting most of their homes are in southern Seoul and Sejong City.

Notably, three of the multiple homeowners have more than two houses in Seoul’s Gangnam Ward, the nation’s most expensive area, and three surrounding wards, it added.

“The 107 ranking officials analyzed by the CCEJ are among the government’s top working-level officials in charge of real estate, financial and tax policies. Their multiple homeownership may have something to do with the government’s failure to rein in property prices despite its 23 sets of real estate regulatory policies,” Yoon Soon-chul, secretary-general of the CCEJ, said in a news conference.