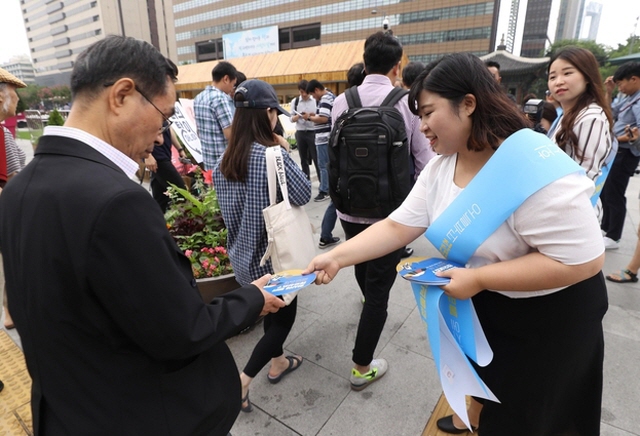 Civic activists conducting a street campaign to promote a new law against workplace harassment in central Seoul on July 16, 2019. (Yonhap)

About 80 percent of the respondents to the survey by a nongovernmental organization said they want enhanced punishment of perpetrators and the expansion of the law to cover more workplaces.

The group, called Gapjil 119, unveiled the result of its survey of 1,000 salaried workers about the effectiveness of the labor law amendment from Oct. 8-15, three months after it went into effect on July 16.

Gapjil is a Korean term meaning abusive attitude and behavior by those in positions of power.

Under the so-called “anti-gapjil” law, if workplace harassment is reported, employers should launch an immediate probe and take proper action.

Employers could face a maximum three-year jail term and a fine of up to 30 million won (US$24,750) should retaliatory or discriminatory measures be taken against victims or those who report abusive acts.

According to the survey, 39.2 percent of the respondents said they feel that workplace harassment has declined in the past three months.

By type and size of organization, employees at public organizations (49.3 percent) and government agencies (48.7 percent) sensed improvement in the highest percentage, followed by companies with 10 trillion won or more in assets (38.6 percent), companies with assets worth between 500 billion won and 10 trillion won (36.7 percent), enterprises with assets less than 500 billion won (35.1 percent) and small individual businesses (34.5 percent).

More older and higher-level workers believed gapjil had lessened than younger and lower-level employees. Such an assessment was made by 50 percent of those aged between 50 and 55, compared to 32.8 percent of those in their 30s.

By rank, 53.6 percent of manager-level workers and 37 percent of junior staff replied there has been improvement.

The civic group’s “gapjil index” decreased by 4.5 points on-year to 30.5 points on a scale of 100 points. A higher score means a more serious situation.

Regarding further measures that should be taken, 86.6 percent of the respondents said the rule should apply to tiny businesses with less than five employees, 81 percent said that unemployment benefits should be given to those who quit a job because of harassment, and 79.2 percent said the law should include a clause stipulating punishment of abusers.