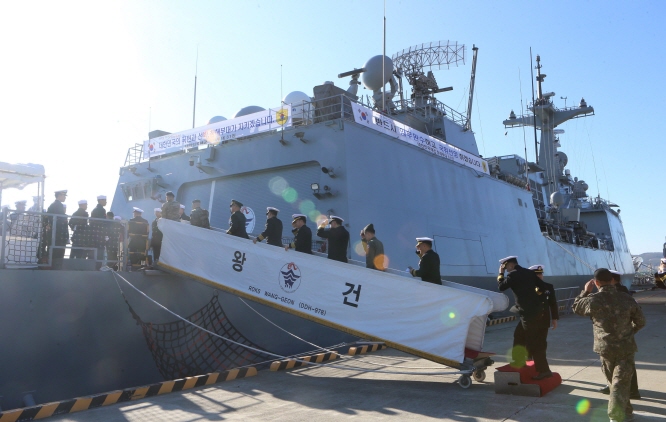 The 300-strong 31st contingent of the Cheonghae Unit holds a send-off ceremony at a naval base in South Korea’s largest port city of Busan on Dec. 27, 2019, before leaving for the Gulf of Aden to combat piracy in waters off Somalia over the next six months aboard the Wang Geon, a 4,500-ton destroyer. (Yonhap)

SEOUL, Jan. 23 (Korea Bizwire) — A majority of South Koreans support the government’s decision to dispatch troops to the Strait of Hormuz for a maritime security operation, a poll showed Thursday.

Earlier this week, the Ministry of National Defense announced that the country’s anti-piracy Cheonghae Unit, operating in the Gulf of Aden, would expand its mission to the strait between the Persian Gulf and the Gulf of Oman.

The move represents Seoul’s efforts to play a bigger role in global issues and keep its alliance with Washington solid.

In the phone survey of 502 people nationwide aged 18 or older on Wednesday, 51.9 percent said it was the right decision, while 33.1 percent expressed disapproval, according to Realmeter.

The margin of error is plus and minus 4.4 percentage points.

The outcome contrasts with that of the pollster’s previous survey, conducted on Jan. 10, which showed 48.4 percent of respondents were against sending South Korean soldiers to the region and 40.3 percent for it.

The proportion of those critical of Moon’s presidency dipped 1.0 percentage point to 49.9 percent, with the margin of error between plus and minus 2.5 percentage points.