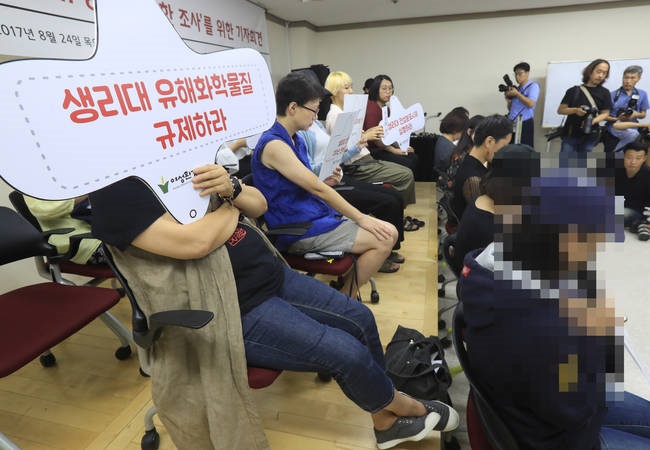 The Seoul-based Korean Women’s Environmental Network held a press conference to announce its analysis of online complaints from 3,009 women who went through health disorders after using the Lilian sanitary pads. (Image: Yonhap)

SEOUL, Aug. 24 (Korea Bizwire) – Six out of 10 users of the controversial Lilian sanitary pads have experienced a change in their menstrual cycle due to possible side effects, an activist group said Thursday, as growing numbers of consumers question the product’s safety.

The Seoul-based Korean Women’s Environmental Network held a press conference to announce its analysis of online complaints from 3,009 women who went through health disorders after using the Lilian sanitary pads.

According to the network, 1,977 women, or 65.6 percent, said they had a change in their menstrual cycle after using the product.

Some of the users complained that they have developed painful cramps, skin trouble and infections after using the product produced by Klean Nara.

Sixty-eight percent of the women said they suffered more severe menstrual pain than ever, while 48.3 percent revealed they contracted skin diseases or had them worsened. Asked about whether they developed any illnesses including vaginitis, 55.8 percent said they did so.

The online survey also said 49.7 percent of the respondents had to see a doctor to treat their menstruation and uterus-related diseases within three years after use.

According to the activist group, a woman suffered menstrual irregularity for three to four years before being diagnosed with polycystic ovary syndrome, a health problem that can affect a woman’s hormone levels, periods and ovulation.

During Thursday’s press conference, the activist group also urged that the Food and Drug Safety Ministry, the country’s heath watchdog, strengthen its investigation into whether the sanitary pads have harmful components as well as whether they meet standards for permission.

In March, the group, alongside a team led by Kangwon National University professor Kim Man-goo, said that 22 kinds of harmful components were detected from 10 different sanitary pads, adding that a volatile organic compound that can also be naturally released from the product at room temperature was among them.

The manufacturers of the sanitary pads in question deny any use of harmful components.

On Monday, the heath watchdog said that it would include the controversial Lilian sanitary pads in its quarterly consumer goods investigation.