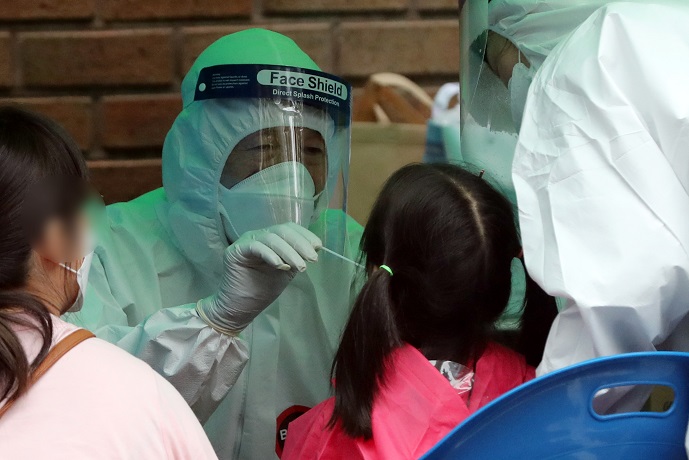 Children are checked for the coronavirus at a screening station set up at a kindergarten in Yeongtong Ward in Suwon, 46 kilometers south of Seoul, on July 13, 2020. (Yonhap)

SEOUL, July 14 (Korea Bizwire) — The vast majority of South Koreans agree that government agencies including the Ministry of Health and Welfare have done a good job in fighting the coronavirus.

Health Consumers Network, a South Korean civic group, conducted a nationwide survey of 1,200 men and women between the ages of 20 and 69, 75.6 percent of whom said that the government took on a significant and outstanding role in fighting the coronavirus.

The government scored an average of 3.93 points out of 5 in terms of its significance in containing the pandemic.

The data showed that 85 percent of South Koreans had positive views toward the medical staff, while 96.6 percent believed that medical staff have made a significant contribution in fighting the coronavirus.

Participants were more divided on the question of how doctors and nurses were being treated.

While 49.8 percent believed that socioeconomic treatment towards medical staff was ‘appropriate,’ 1 in 4 South Koreans also thought the treatment was either ‘fair’ (25 percent) or ‘poor’ (25.3 percent).

The coronavirus pandemic has raised public awareness on sanitation as more than 70 percent of participants believed that ‘sanitation in everyday life’ was crucial for maintaining one’s health, most likely led by fear that exposure to a virus in a populated or unsanitary area may result in infections.