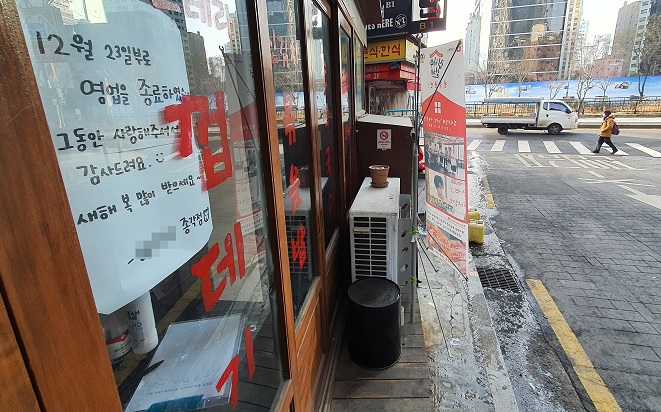 This file photo, taken Jan. 14, 2021, shows a notice informing customers of a temporary business closure due to the coronavirus put up at a restaurant in Seoul. (Yonhap)

In the online survey of 2,016 people aged 18 or above by the Korea Institute of Public Administration from Nov. 15-22, 68 percent said their average monthly income was lower in 2021 than in 2019 before the pandemic struck.

The income decrease appeared to be attributable to shorter working hours amid the pandemic.

The survey also showed that 39.2 percent of respondents said they became unhealthier and 43.7 percent said their mental health deteriorated during the pandemic.

The government’s antivirus measures received a positive assessment in general, with the mandatory face mask rule, self-isolation of all inbound travelers and no-assembly order on adult entertainment facilities receiving over 4 points on a 5-point scale, according to the survey.