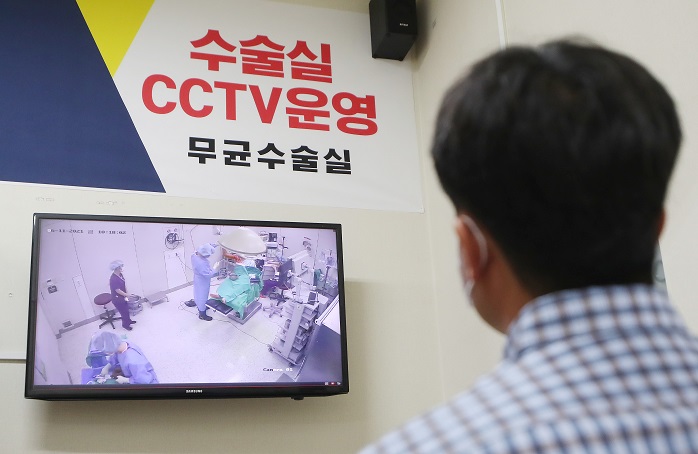 A man watches real-time footage of an operating room via closed-circuit (CC) TV at a hospital in Incheon, 40 kilometers west of Seoul, on June 11, 2021. (Yonhap)

According to the survey conducted by Realmeter on Friday, 78.9 percent of respondents said they support installing closed-circuit (CC) TV cameras, with 48.8 percent showing strong support and 30.1 percent moderate support.

The poll was conducted on 500 people aged 18 and older to determine people’s opinions on a controversial legislative bill that seeks to mandate CCTV cameras in hospital operating rooms as a safeguard against medical malpractice.

Calls for such legislation grew after a college student in Seoul died following plastic surgery in 2016.

The surgeons in the case are standing trial on charges of malpractice resulting in his death.

The bill, however, has been pending at the National Assembly amid opposition from doctors’ groups that claim it will infringe on the rights of surgeons and create distrust between doctors and patients, leading to poorer medical service.

Patients’ groups have countered that surveillance cameras are needed to prevent cover-ups of medical malpractices and sex offenses by doctors against patients.

The poll, commissioned by cable news channel YTN, has a margin of error of plus or minus 4.4 percentage points at a 95 percent confidence level.