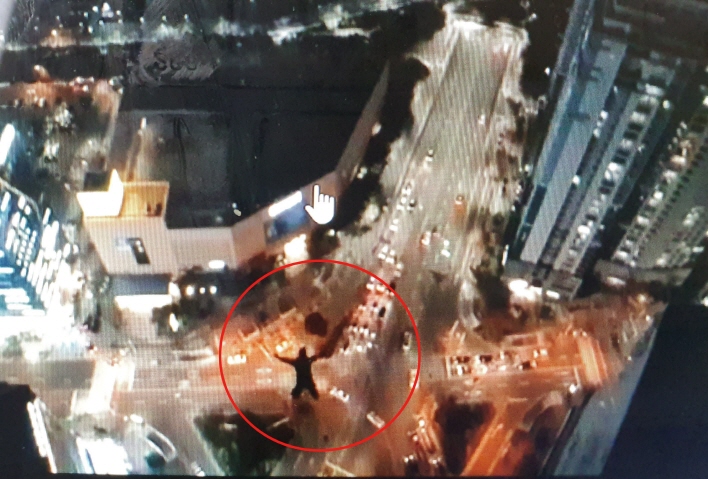 This image of a man base jumping from a skyscraper in Busan is captured from a video posted on the jumper’s social media account. (Yonhap)

The two men, one of them aged in his 30s, jumped off the roof of a 40-story office building Saturday evening before launching another expedition in the afternoon the next day, off the top of a 42-story hotel building, according to the police.

The skydivers, who made the jumps without permission from the buildings’ management, were booked on trespassing charges.

According to the police, the two jumpers, who are well-known in Russian base jumpers’ circles, entered South Korea last Wednesday with a mission to venture off the 101-floor LCT landmark building in the port city.

As part of a preliminary survey, the duo visited the skyscraper’s lobby in order to inspect the site, according to the police.

“The act of jumping off a high-rise building is not subject to punishment as long as it does not pose a threat to other people, but we decided to criminally punish them because they did the dangerous act in the heart of the city,” a police official said.

Police plan to bar the duo from leaving the country over the next 10 days for the investigation.

The duo has a previous record of being punished for a similar case in China. In April last year, they have been confined in China for a 10-day period after skydiving off the super tall skyscraper China Zun in central Beijing.

The duo uses social media to publicize their jumping ventures, with many video clips posted showing their previous plunges from factory and office buildings across the globe, including those from the skyscrapers in Busan.