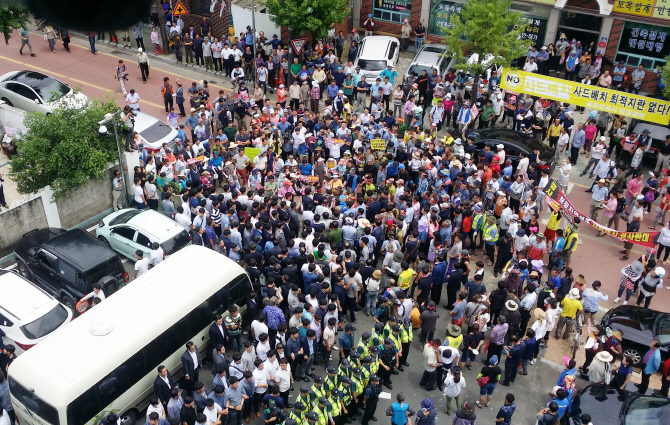 The protesters demanded that an independent body comprised of foreign experts assess any potential environmental damage if the Moon government wants to verify the safety of the THAAD radar. (image: Yonhap)

SEONGJU, Aug. 13 (Korea Bizwire) — Local residents and activists campaigning against the deployment of an advanced U.S. missile defense system said Sunday they will not accept the outcome of a government survey that ruled out the possibility of its serious environmental damage.

On Saturday, the government announced the result of a survey of electromagnetic radiation and noise from the Terminal High Altitude Area Defense (THAAD) system in Seongju, some 300 kilometers southeast of Seoul.

The defense ministry said the radiation level was far below the regulatory protection standard and the noise level in the residential areas is also on par with the maximum regulatory threshold.

Seongju residents and civic groups denounced those findings, saying it is not credible since the test was only done by the government and without any experts from the private sector.

“There was no one in the assessment team that we recommended, and it is not acceptable since it’s not a full test but a very partial one done to wrap up the whole process, which is illegal,” said Lee Seok-ju, a representative of the Seongju residents.

The protesters have called on the liberal Moon Jae-in administration to scrap the deployment decision that was made during the previous Park Geun-hye government.

Two rocket launchers and a powerful X-band radar are operational at the new base, formerly a private golf course, in Seongju.

The protesters demanded that an independent body comprised of foreign experts assess any potential environmental damage if the Moon government wants to verify the safety of the THAAD radar.

In response, the government said earlier in the day that there will be no change in its plan to deploy four more THAAD launchers and that it will spare no efforts to ask the residents for understanding and convince them.

The three major opposition parties released a statement earlier in the day, calling on the government to further move toward its full deployment as the survey proved the missile defense system will carry little environmental risk.

The ruling Democratic Party again stressed the THAAD deployment shall be carried out through due procedures.