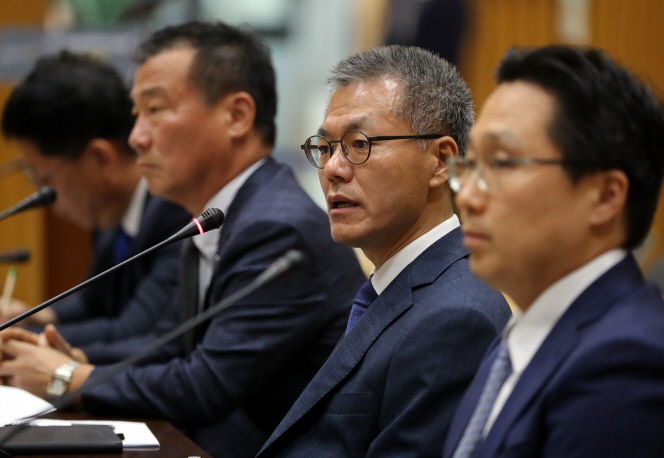 SEOUL, Aug. 28 (Korea Bizwire) — The chief of a local humidifier disinfectant manufacturer responsible for the nation’s worst consumer chemical disaster that broke out in 2011 triggered a controversy Wednesday by arguing that the tragedy was caused by insufficient government supervision.

Park Dong-suk, CEO of Oxy Reckitt Benckiser (RB Korea), a wholly owned unit of British consumer giant Reckitt Benckiser Group PLC, made the controversial remarks during a hearing organized by the Special Commission on Social Disaster Investigation to look into the causes of the humidifier sterilizer scandal that has so far claimed the lives of more than 1,420 consumers in South Korea.

“I think there would have been no such disaster if the government had had thorough supervision. The government should have supervised the industry thoroughly when SK Chemicals first developed and sold a humidifier sterilizer in 1994 and RB Korea introduced a similar product in 1996,” Park said on the second day of the two-day hearing held at Seoul City Hall.

When Park made the controversial statements, victims of the deadly humidifier disinfectant products and their families screamed and protested loudly.

At the hearing, the Special Commission on Social Disaster Investigation questioned Park about the responsibility of Britain’s Reckitt Benckiser Group and its countermeasures to the scandal.

Choi Ye-yong, vice chairman of the commission, pointed out that Reckitt Benckiser Group was informed by its laboratory in the United States of humidifier sterilizer products and convened an emergency meeting of its global safety team but didn’t send any responsible executives or officials to Korea during a parliamentary investigation in 2016.

In January 2018, the Supreme Court upheld lower courts’ six-year prison sentence for Shin Hyun-woo, former CEO of RB Korea, after finding him guilty of accidental homicide due to professional negligence.

RB Korea’s disinfectants started being sold in South Korea in 2001. Their risks first came to light in 2011 after some pregnant women died of unidentified lung ailments.

The local authorities launched a probe and concluded that it was caused by polyhexamethylene guanidine, an anti-bacterial agent used in the humidifier cleanser that can be fatal when it’s inhaled in the form of droplets.

The product’s toxicity has affected 181 people, 73 of whom died of a pulmonary disease, including children. Many of the survivors have to breathe through a support device for the rest of their lives.