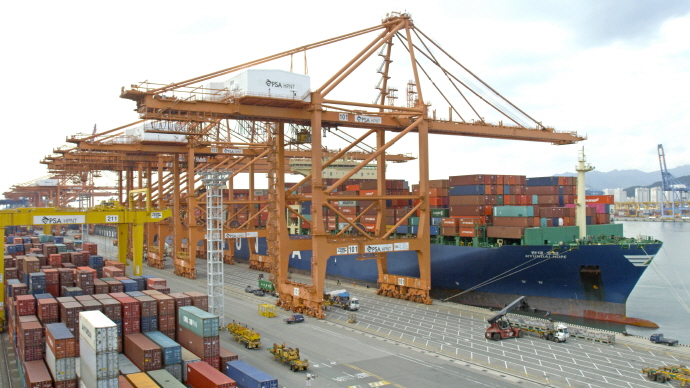 The Busan Port Authority plans to establish a port security system with funding of 1.84 billion won over three years, including 500 million won (US$442,477) this year from the Ministry of Science and ICT. (Yonhap)

The BPA announced on Wednesday that it had been chosen by the Ministry of Science and ICT for its new research and development (R&D) project to develop a port security system.

The BPA plans to establish a port security system with funding of 1.84 billion won over three years, including 500 million won (US$442,477) this year from the ministry.

The BPA is planning to develop the related technologies with two small and medium-sized local companies and Pusan National University.

The key to this system is electronic document encryption using blockchain technology and human recognition technology that are difficult for the existing security systems to recognize.

An official from the BPA said that it plans to develop a system that targets access authorization and then expand its domain for application.

Those wishing to enter the port must obtain authorization prior to entering.

In this process, there are concerns of hacking or information leaking by insiders by collecting and storing the applicant’s personal information.

The BPA will focus on encrypting personal information by applying blockchain technology, distinguishing the level of information that can be accessed by employees of related agencies, and reducing the possibility of leakage by minimizing shared information.

In addition, the port authority will develop technology to prevent accidents by real-time monitoring of the movements of people who are allowed to enter using the Internet of Things.

Currently, there is a risk of accidents in areas where there is no security system such as CCTV.

Thus once a person is admitted into a dock, it is difficult to pinpoint their movements leading to incidents such as a recent case in which a worker taking a break was killed.