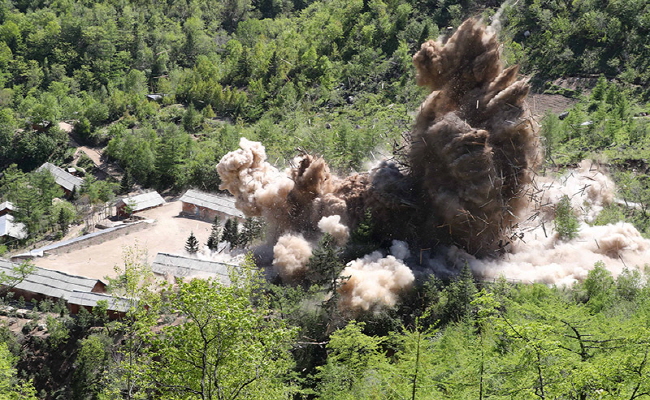 This photo, provided by North Korea’s state news agency on May 25, 2018, shows North Korea’s demolition of its Punggye-ri nuclear test site on the northeast. (Yonhap)

A total of 40 defectors were tested for radiation exposure from 2017 to last year and nine of them are thought to have been exposed to radiation, Rep. Park Dae-chul of the Liberty Korea Party said, citing data from the Korea Institute of Radiological & Medical Sciences (KIRAMS).

Eight of the nine suspected victims of radiation exposure had lived in the vicinity of the Punggye-ri site in the North’s northeastern region before defecting to South Korea, according to the lawmaker.

KIRAMS tested 30 defectors between October and December 2017 and another 10 in September last year using urine samples and chromosomal abnormality examinations.

Nine people showed chromosomal abnormalities, raising suspicions of that they had been exposed to radiation, the lawmaker said.

Eight of the suspected victims of radiation exposure had lived in Kilju County, Myongchon County and other areas close to the Punggye-ri nuclear site, he noted.

“The results of the radiation exposure tests cannot be verified clearly due to various variables, but the state-run institute explained their chromosomal abnormalities showed that they were not exposed to radiation at least two to three months ago,” said Park, calling for practical countermeasures from the Ministry of Unification and the Nuclear Safety and Security Commission.

In May last year, North Korea demolished the Punggye-ri nuclear testing facility in a show of its commitment to denuclearization. The North had conducted all six of its nuclear tests there, including the latest in September 2017.