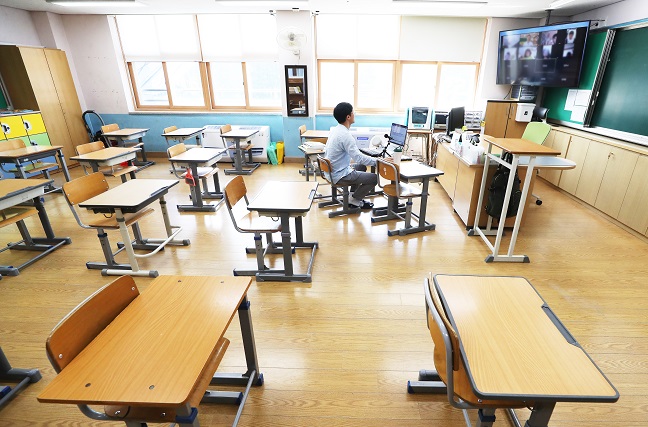 A teacher conducts an online class from an elementary school classroom in Yongin, south of Seoul, on Aug. 19, 2020. (Yonhap)

SEOUL, May 13 (Korea Bizwire) — More than 8 out of 10 South Korean teachers are experiencing more stress from their educational activities after the outbreak of the coronavirus, a survey showed Wednesday.

The Korea Federation of Teachers’ Associations had conducted a survey of 7,991 teachers working at preschools, elementary schools, middle schools, high schools and universities across the country.

The survey revealed that 85.8 percent of the respondents were experiencing more difficulty in educational activities compared to the time prior to the virus outbreak.

In response to a question asking about the biggest difficulty or stress arising from COVID-19, the largest share of the respondents (20.9 percent) pointed out the implementation of remote teaching and efforts to reduce learning gap.

As for a question asking whether they were satisfied with their current teaching life, 35.7 percent said ‘yes’.

Only 31 percent said they would become teachers again If they were reborn.

At 50.6 percent, roughly half of the respondents said that teachers’ authority was not well-protected at schools.

In response to a question asking about how the morale of teachers has changed over the past couple of years, the largest share of the respondents (78 percent) said that morale had decreased, up 22 percentage points from 55.3 percent in 2009.

As to a question asking about the biggest difficulty in their teaching life (multiple answers possible), 20.8 percent picked complaints from parents, as well as maintaining a relationship with them, followed by guidance for students who make trouble or have difficulty adapting to school (20.7 percent).