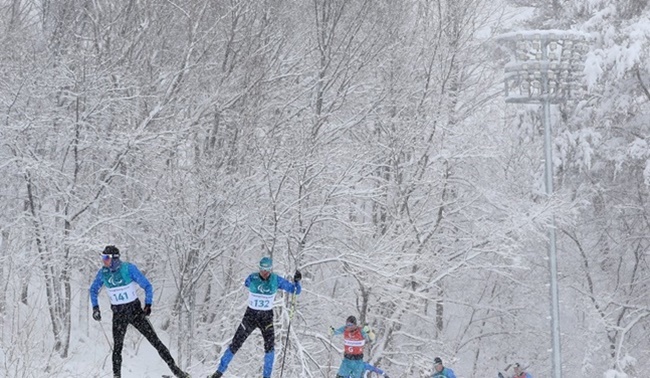 The flags of nations that will participate in the upcoming PyeongChang Winter Paralympics fly at the Paralympic Athletes Village in PyeongChang, Gangwon Province, on March 5, 2018. (Image: Yonhap)

The PyeongChang 2018 organizers said 900 people from 37 countries have already entered the Paralympic Village in PyeongChang, 180 kilometers east of Seoul, for the March 9-18 Paralympic Games. The organizers expect the village to welcome more than 600 people this week, since there are 1,500 people from 49 countries registered to participate inthe first Winter Paralympics in South Korea.

The organizers said North Korea, which will make its first Winter Paralympic appearance in PyeongChang, is scheduled to have its village welcoming ceremony on Thursday. The North Korean Paralympic delegation, comprising 24 members, including two sit-skiers, is scheduled to come south of the border on Wednesday.

Just as at the Olympics, the village will have various facilities for athletes, including banks, post offices, convenience stores, laundry rooms and gyms.

“The PyeongChang Village will have eight 11-story buildings, which amounts to 372 units with 2,332 beds during the Paralympic Games,” an official with the PyeongChang 2018 organizing committee said. “Nearly half them are wheelchair accessible rooms. We have also set up wheelchair repair centers inside the village, so that athletes can feel comfortable during their stay.”