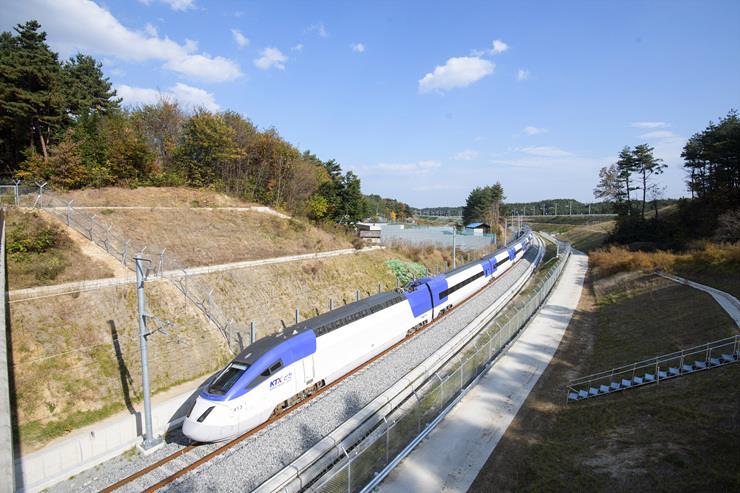 A bullet train on the Gangneung KTX line. (image: Korail)

SEOUL, Jan. 30 (Korea Bizwire) — People planning to visit popular seaside tourist spots along South Korea’s northeastern coast will have an additional option of a high-speed train ride from March this year, when the Gangneung KTX bullet train line is extended to Jeongdongjin Beach, Mukho and Donghae.

The office of Rep. Lee Chul-gyu of the main opposition Liberty Korea Party said Thursday that the opening date for the extension of the Gangneung KTX line to the port of Donghae via Jeongdongjin and Mukho has been set for March 2.

The extension will come about two years and three months after the Gangneung KTX line opened in December 2017 prior to the 2018 Winter Olympics in PyeongChang, near Gangneung, curtailing the train travel time from Seoul to the key northeastern coastal port city to 90 minutes.

At present, the bullet train between Seoul and Gangneung runs eight times per day from Monday to Thursday, with the frequency increasing to 14 times on Saturday and 13 times on Friday and Sunday.

The one-way fare to Donghae Station from Seoul Station has been set at 31,300 won (US$26.40), with the fare between Seoul’s Cheongnyangni Station and Donghae set at 29,700 won.

Fare for Jeongdongjin and Mukho from Seoul Station is set at 28,300 won and 30,700 won, respectively.

Currently, it takes three to four hours to travel from Seoul to Donghae Station, as travelers have to change to ordinary trains or buses from the Gangneung KTX Station.

From March, however, it will take less than two hours to travel from Seoul to Donghae.