London, Feb 06, 2014 (Korea Bizwire) – Eros International Plc (EROS) (“Eros”), a leading global company in  the Indian film entertainment industry announced today that it will  release the blockbuster film, English Vinglish, in South Korea on  February 6, 2014. Following on the heels of the film’s success in Hong  Kong and Germany last year, English Vinglish will be released  across 150 screens, making it one of the biggest Bollywood releases in  South Korea to date.

The film, directed by Gauri Shinde, has performed exceptionally well in  new markets. In Taiwan, the film was released across 6 screens in  December, 2013 and amassed over US$ 300,000, making it the second  biggest grossing Bollywood film in Taiwan. English Vinglish also  continues to hold a firm position in Taiwan’s top 10 charts.

Speaking on the film’s success, Kumar Ahuja, President, Business  Development, Eros International Media Ltd, said, “English Vinglish is  a universal story that truly resonates with global audiences, especially  as it relates to acceptance and the challenges of learning a new  language. With newer markets for the film consistently opening, we  believe audiences worldwide will continue to find a connection with this  captivating film. 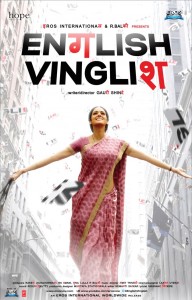 In 2014, Eros will look to further expand its presence in Asia by  releasing films such as Cocktail, Student Of The Year and  Table no 21 in Taiwan and Chalo Dilli, English Vinglish, Dabaang,  Student Of The Year and Agent Vinod in Japan. The  Japanese market has already proven to be a strong one for Eros as the  Company’s release of Farah Khan’s Om Shanti Om across 14 screens  earned over US $ 150,000 at the Japanese box office in 2013.

Eros is also making inroads in Eurasia and Russia with plans to release  some of its hit films including, Yeh Jawaani Hai Deewani, Rockstar,  Zindagi Na Milegi Dobara, Student of the Year, Vicky Donor and  Desi Boyz in these territories during 2014. This activity comes on  the heels of the successful Eros film, Cocktail, which was  released in March, 2013 across 19 screens in Kazakhstan and Kyrgyzstan  and became the first Indian film in these countries to gross over US$  100,000 at the box office.

Finally, Eros has expanded into African markets with the release of its  hugely successful Krrish 3 across 14 screens in Egypt this past  December.

Eros International Plc (EROS) is a leading global company in the  Indian film entertainment industry that acquires, co-produces and  distributes Indian films across all available formats such as cinema,  television and digital new media. Eros International Plc became the  first Indian media company to list on the New York Stock Exchange. Eros  International has experience of over three decades in establishing a  global platform for Indian cinema. The Company has a competitive  advantage through its extensive and growing movie library comprising of  over 2,000 films, which include Hindi, Tamil, and other regional  language films for home entertainment distribution. Eros International  has built a dynamic business model by combining the release of new films  every year with the exploitation of its film library. For further  information please visit: www.erosplc.com