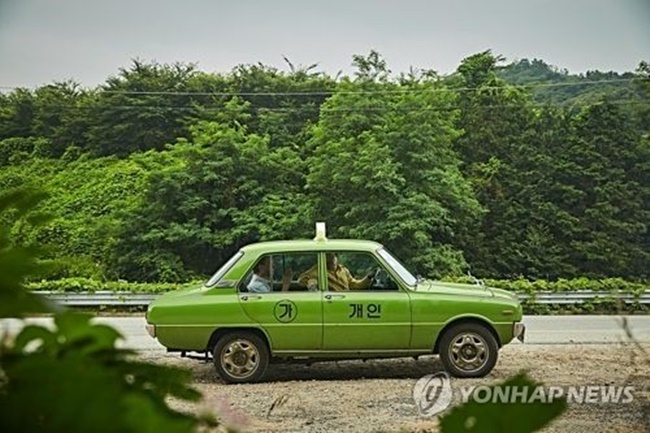 This image is a scene from “A Taxi Driver.” (Image: Showbox)

SEOUL, July 17 (Korea Bizwire) – A new domestic film on the 1980 pro-democracy uprising in Gwangju will open in English-speaking and other Asian countries following its domestic release next month, its local distributor said Monday.

“A Taxi Driver” is set to open in North American countries on Aug. 11, Australia and New Zealand on Aug. 24 and Britain on Aug. 25, according to Showbox.

It will then be shown in Hong Kong later that month and Taiwan, Japan and other Asian countries from September.

“The movie was screened at the Cannes Film Market in May and attracted the interest and expectations of many buyers and distributors,” said an official from Showbox’s overseas team.

Directed by Jang Hoon, the film tells the story of a Seoul taxi driver named Man-seop who happens to take German reporter Jurgen Hinzpeter to Gwangju, some 330 kilometers south of Seoul, and witnesses the horrors of the bloody military crackdown on the May 18 uprising. It stars South Korean actor Song Kang-ho of “Snowpiercer” as the taxi driver and renowned German actor Thomas Kretschmann, who was featured in the Roman Polanski film “The Pianist,” as Hizpeter.

The movie’s domestic release is set for Aug. 2.