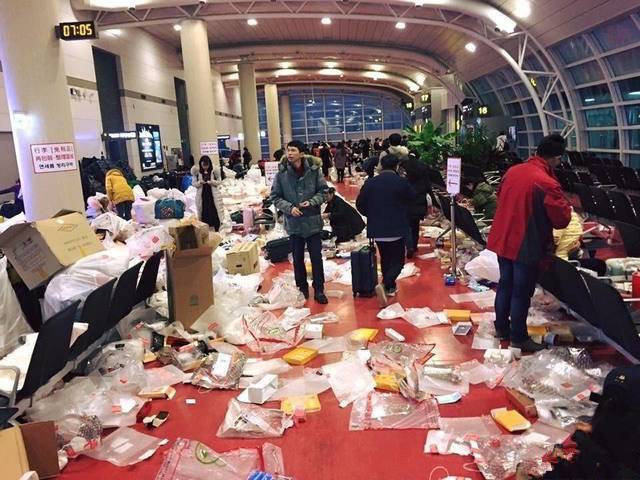 The latest controversy was sparked when photos and footage of a Jeju International Airport terminal, trashed with packaging from duty-free purchases by mainly Chinese tourists, was released online and through news reports.

SEOUL, Feb. 17 (Korea Bizwire) – Chinese tourists have become an indispensable asset for domestic tourism, accounting for roughly 60 percent of all individual travelers to Korea, and over half of all customers at local duty-free stores.

But as is the case for all popular tourist destinations, misbehaviors and an apparent lack of respect for local culture practiced by a minority of visitors from China is stirring public discontent and criticism, and even anti-Chinese sentiment.

The latest controversy was sparked when photos and footage of a Jeju International Airport terminal, trashed with packaging from duty-free purchases by mainly Chinese tourists, was released online and through news reports. Although the images have come as a shock to many South Koreans, officials in the retail industry were quick to claim that the latest news is only the tip of the iceberg.

“We often have Chinese tourists spitting all over the ground in front of our duty-free store, so we always feel sorry for the cleaning staff,” said a 20-year employee at a Jeju duty-free store. “We’ve also had tourists smoking in non-smoking areas, which urged local police to intervene by handing out and attaching fliers, but there was very little impact.”

The official further added that he had even seen people playing card games sitting on the floor of the store’s lobby, and the hallways are frequently seen with food waste spilled or discarded by tourists.

More common are problems arising from differences in toilet culture.

“I once saw a Chinese parent let their child urinate in the corner of a store, after the child said it was urgent,” said an official from another outlet in Jeju. “I don’t know if it’s their common use of squat toilets, but Chinese tourists usually step on top of the toilet seat when they use the restrooms, which leads to complaints from other customers.”

Tourists who go way overboard with haggling over prices are also prevalent.

An official who up until recently worked at a luxury watch boutique in a Seoul duty-free store said she once encountered a Chinese shopper who tried to bargain for almost 12 hours, despite repeated reminders that the store only offer fixed-price products, while another tourist held on to a Japanese shopper who had purchased a watch he apparently liked, asking to sell it back to him, putting everyone in an awkward situation.

The official added that arrogant, bossy behavior was commonplace as well, with Chinese tourists often showing off their wealth, or displaying a highly sinocentric attitude.

“A Chinese tourist once showed us a James Bond briefcase full of cash, and demanded in Chinese that we ‘give him special treatment’,” she said, adding that ignoring employee requests, cutting lines, and throwing away products they were looking to buy were “nothing out of the ordinary.”