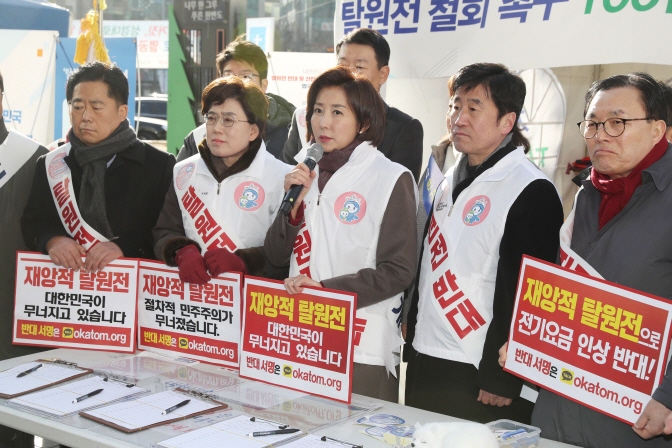 Leaders of the Liberty Korea Party asking Seoul citizens to join in a signature-collecting campaign against the government’s nuclear phase-out policy on Jan. 9, 2019. (Yonhap)

The organizers, led by the main opposition Liberty Korea Party (LKP) and civic groups, said the campaign calling for reversal of the Moon government’s nuclear policy had gathered signatures from 336,768 people as of 7 a.m. the same day.

The organizers of the campaign are to hold a news conference in front of the presidential office Cheong Wa Dae in the morning before delivering the signatures and a letter written to Moon.

“The nuclear phase-out policy has been unilaterally and hastily pushed without public consensus and consultations with experts,” Rep. Choi Yeon-hye of the LKP said in a statement issued ahead of the news conference.

“The campaign will now embark on a resistance movement to urge an end to the nuclear phase-out policy and the resumption of the Shin Hanul 3 and 4 nuclear plants,” she said.

As part of its presidential election pledge to turn South Korea into a nuclear energy-free country, the Moon government suspended the construction of the Shin Hanul 3 and 4 reactors in the southeastern part of the country in 2017.

Moon and Cheong Wa Dae officials have since said the government has no intention to change or reverse the nuclear phase-out policy.