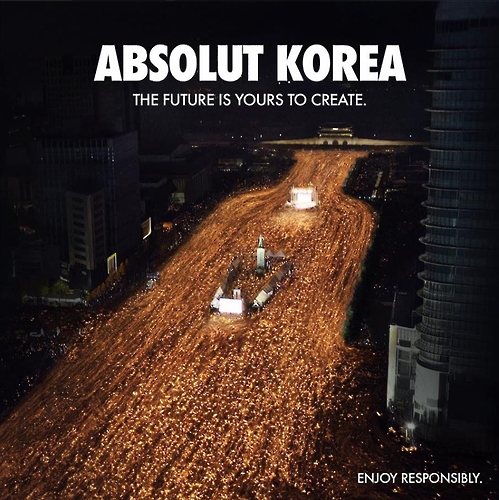 The copy says “The future is yours to create” and “Enjoy responsibly” with the candlelight taking the shape of a vodka bottle. (image: Absolut Korea Facebook)

The global leading vodka brand, owned by French group Pernod Ricard, disclosed its new advertisement on its official Facebook on Saturday. The ad shows an image of a massive rally with hundreds of thousands of South Koreans holding candles in downtown Seoul.

The copy says “The future is yours to create” and “Enjoy responsibly” with the candlelight taking the shape of a vodka bottle.

For weeks, South Koreans have gathered at the protest rallies, demanding President Park Geun-hye step down over allegations that her long-time confidante Choi Soon-sil meddled in state affairs. A motion to impeach Park was passed in the National Assembly on Friday.

Some local consumers have pointed out that the advertisement is inappropriate, saying the company is taking advantage of the political event.

“I feel horrible and shameful that I held a candle so that I could be used as an advertisement for an alcoholic beverage manufacturer,” said one consumer on the Internet.