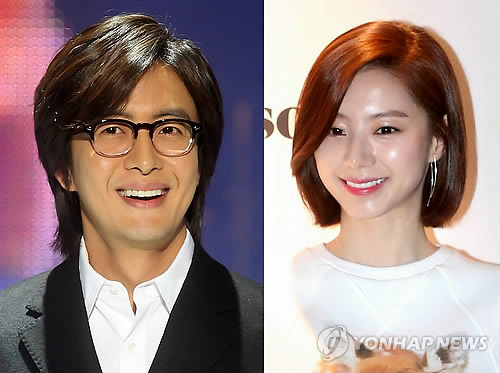 “The two had known each other before and began a serious relationship in February,” Keyeast said in a release posted on its website. “The two received approval from their parents and plan to tie the knot this fall.”

The agency said the specific schedule for the wedding hasn’t been confirmed yet.

Bae is the largest shareholder of Keyeast, and Park joined the agency in March 2014.

Yang Geun-hwan, CEO of Keyeast, said the company made it public earlier than expected because the couple wanted to get away from paparazzi.

“Bae wanted to avoid paparazzi and didn’t want unnecessary speculations,” Yang told Yonhap News by phone. “They had promised marriage and were set to make an announcement soon. But we decided to announce it earlier than scheduled after hearing that a tabloid was going to report (their marriage) soon.”

The 43-year-old Bae became one of the first and most successful Korea Wave stars with his role in “Winter Sonata,” which aired in 2002, especially in Japan where he is lovingly called “Yonsama.”

Park, 30, debuted in 2002 as a singer in female idol group Sugar, and began her acting career after the group disbanded in 2006. She has been an MC on TV show “Tasty Road,” which introduces hot and trendy restaurants in Seoul.’