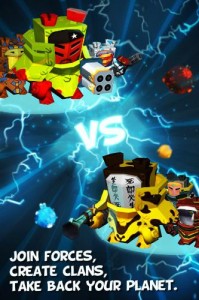 Actoz Soft announces the release of a new shooting game for iPhone and iPad called In a Space. (image credit: Actoz Soft)

SEOUL, Korea, Feb. 24 (Korea Bizwire)  – Actoz Soft, in conjunction with PlayPieGames, app developers based in Seoul, South Korea, are excited to announce the release of a new shooting game for iPhone and iPad called In a Space. The game is designated to be released on February 17th and will be available for the Canadian market through the iTunes App Store.

In a Space is a location-based (LBS) game that detects the city and country of the user so that this region can become the starting point of the player’s game. The game is very easy to use and offers a simple targeting system. The controls are located on the left and right side of the player’s fortress and are very easy to maneuver. Simply by moving a finger around in a circle, a player can target and shoot enemies or move their weapons to a new location.

The object of the game is to destroy the Citadel and the Custodian, who have come to earth from another universe. As players complete Quests, they are given more points and better weapons. They can also form “Clans” with other players in order to defeat the enemy quicker. Each time a player or clan defeats a new enemy, they are rewarded and will move forward in the game.

In a Space offers exciting sound effects, thrilling music and 3D graphics for an entertaining and fun gaming experience.  Players will also enjoy the massive Boss stages at the end of each level. The adrenaline-pumping action never stops.

The game designers have gone to great lengths to give players cool graphics, exciting weapons and challenging game play. The advanced targeting system makes it easy to wipe out the enemies that keep coming after you. In a Space is suitable for all ages and offers thrilling game play and user-friendly controls.  At the moment, the game is free and available to the Canadian market through the iTunes App Store at:https://itunes.apple.com/app/id792572495?mt=8

Actoz Soft is an app developer and publisher located in Seoul, South Korea. Additionally, the company is a global mobile publisher, as well as cooperative company with SEGA, SQUARE, ENIX and Shanda Games. They create high-quality games for the Internet and mobile industry. In a Space is their latest game for iPhone and iPad, but it is currently only available to the Canadian market through the Apple iTunes app store. They have also developed the following games: “1000 Years,” “Mir II,” and “A3: The Age of Sovereign.” Their major work is Million Arthur, the global hit card game, with 10 Million Downloads. They strive to produce entertaining games for adults and kids of all ages. For more information please visit: http://www.actoz.com.