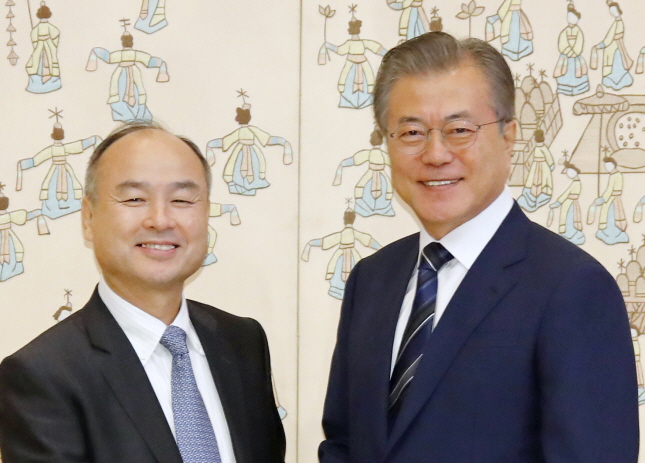 Moon had a 90-minute meeting with Son at the presidential compound, 50 minutes longer than scheduled.

When it comes to what South Korea should focus on, “the first is AI, the second is also AI and the third is AI as well,” Son was quoted as telling the president.

He also vowed support for South Korea so that global firms can expand their investment in its AI industry.

Moon pointed out that South Korea is a latecomer in the AI business but has the strength of the world’s top-notch internet networks and the commercialization of 5G communication systems.

Son suggested that South Korea take a “bold” approach to catch up with other countries with an advanced AI industry.

Son, whose Korean name is Son Jeong-ui, is a globally renowned businessman of Korean descent. Recently, he has massively invested in global mobility companies such as Uber and Grab.

It’s highly unusual for the president to have a separate official meeting with a business figure at Cheong Wa Dae.

It reflects Moon’s push for the innovative growth of Asia’s fourth-largest economy amid concerns about its future growth engine. 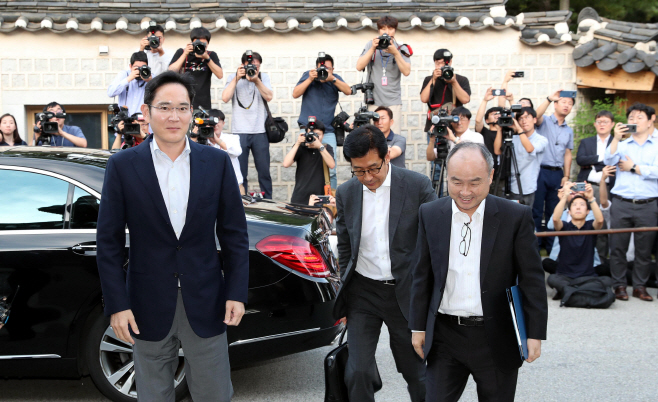 Samsung Electronics Vice Chairman Lee Jae-yong (L) and SoftBank Group CEO Masayoshi Son walk side by side on their way to dinner in Seoul on July 4, 2019. (Yonhap)

Moon recalled his visit to the headquarters in Japan of SoftBank in 2012. At that time, Moon said, he was impressed by Son’s Asia Super Grid initiative.

The president also pointed out that Son advised South Korea’s Kim Dae-jung administration to promote high-speed internet networks. For the Roh Moo-hyun government, he recommended the nurturing of the online game industry.

Joining the Moon-Son discussions, Kim Sang-jo, chief of staff to Moon for policy, said, “I think today is a very important day for the future of the South Korean economy and the entire South Korean society.”

A Cheong Wa Dae official said that Moon and Son did not talk about Japan’s curbs on exports of key tech products to South Korea.

Reportedly, Son and Lee headed for dinner in the same vehicle, where they might have had one-on-one talks for about half an hour.

The dinner meeting lasted for about 150 minutes, longer than anticipated.

In response to questions as to whether he will seek cooperation with South Korean companies in the AI sector and whether investment could be made within this year, he said, “Yes,” and “I hope so.”

Asked whether he offered advice to the business leaders with regard to Japan’s recent move to curb exports to South Korea, Son said, “Yes, we talked a lot about it.” He did not elaborate.

Entering the dinner venue, he declined to comment on South Korea-Japan relations and what companies can do to improve the ties, saying that he does not know about politics.