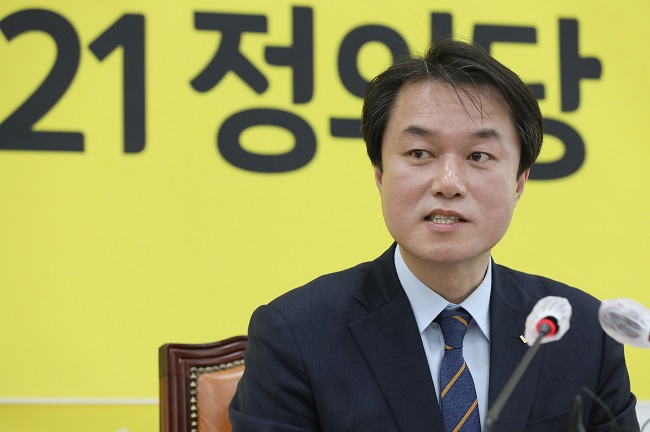 It is the first time that the head of an established political party has resigned due to sexual misconduct. The unprecedented case is expected to deal a crushing blow to the party which has championed gender equality on top of the rights of social minorities.

The sexual misconduct took place right after Kim and Jang had a dinner meeting near the National Assembly in Seoul that day, according to Bae.

Jang notified Bae, who is in charge of gender and human rights affairs at the Justice Party, of the incident three days later, she added.

“Through several rounds of meetings with the victim and the perpetrator, (the party) investigated the case and the perpetrator admitted to his wrongdoings,” she said. “This is an unquestionably obvious case of sexual harassment.”

In accordance with the investigation result, the party’s leadership convened a disciplinary committee meeting earlier in the morning and decided to dismiss Kim from the party chief post, according to party officials.

In a separate statement, Jang, a first-term lawmaker, said “it has been an enormous shock and pain to have my human dignity degraded by the chief of our own party, a political partner whom I have worked with for the eradication of sexual violence and deeply trusted.”

Jang, however, is not reportedly considering referring Kim to the police for a criminal charge.

The outgoing party chief apologized and called on the party to sternly punish him.

“I committed an act of obvious sexual harassment by making bodily contact with the victim, which she did not want nor agreed to,” Kim said in a press release.

“I apologize again to the victim, as well as to the many people who support the Justice Party. … I will work hard to change my vulgar sexual perceptions,” he said, adding, “I request (the party) sternly punish me.” 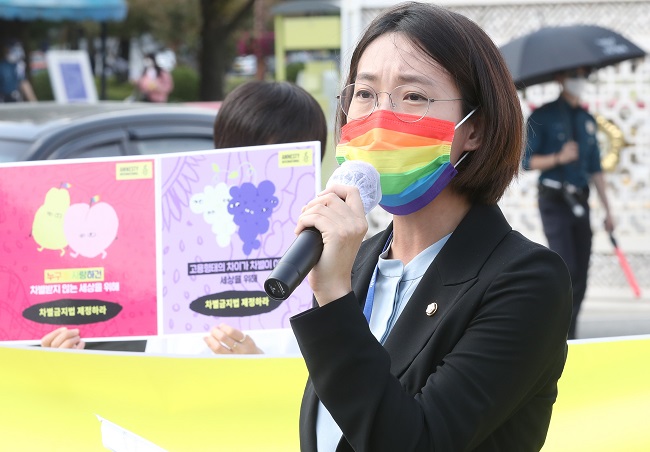 The departure of the 51-year-old Kim came only about three months after he took office as the Justice Party chief in October, with a pledge to solidify the party’s progressive agenda.

“It is fatal (news) to party members and the public who cherished and loved the Justice Party. I give my deep, sincere apology. The party will have time to repent profoundly,” Bae noted.

Kim is the latest liberal- and progressive-bloc political heavyweight disgraced in a sexual misconduct case.

Three iconic politicians of the ruling Democratic Party (DP) have been convicted or accused of sexual abuse over the past three years, severely tainting the moral ground of the country’s liberal and progressive political bloc that has espoused social and gender equality.

An Hee-jung, once deemed a powerful presidential candidate of the DP, is currently serving a 3 1/2-year prison sentence for raping one of his former female secretaries.

He resigned as a governor of South Chungcheong in 2018 in the face of sexual abuse allegations.

Conceding the accusation, Oh stepped down from the mayoral post and is currently facing a prosecution investigation.

Park was found dead on a mountain in Seoul in an apparent suicide after he was accused of sexually harassing one of his former secretaries.