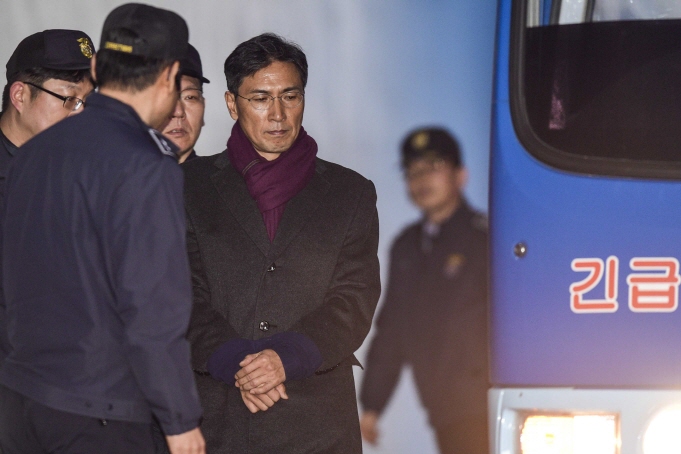 Ex-South Chungcheong Gov. An Hee-jung walks to a vehicle at the Seoul High Court following a ruling that sentenced him to 3 1/2 years in prison on Feb. 1, 2019. (Yonhap)

SEOUL, Sept. 9 (Korea Bizwire) — South Korea’s top court on Monday confirmed a lower court ruling that sentenced a former provincial governor to 3 1/2 years in prison for sexually abusing his secretary in one of the country’s most high-profile MeToo cases.

The Supreme Court handed down the ruling to former South Chungcheong Province Gov. An Hee-jung, saying that the victim’s testimony was consistent and credible enough to be accepted as evidence.

“The victim’s testimony is deemed credible given that it is consistent and very detailed without parts that are inconsistent,” the top court said in a statement.

It also cited “gender sensitivity” as legal logic that supported the ruling.

An was accused of exploiting his power to sexual abusing his female secretary, Kim Ji-eun, several times from July 2017 to February last year.

Kim, who served as An’s public affairs secretary, claimed that An forced her to have sex with him and groped her multiple times over the eight-month period.

A district court found him innocent of the sex abuse charges.

But in February, the appeals court sentenced him to 3 1/2 years in prison, finding him guilty of nine of the 10 charges, including abuse of power and sexual molestation.

The case, which came to light following Kim’s testimony of the charges in a live TV interview in March 2018, fueled the country’s nascent MeToo movement and ended the liberal presidential hopeful’s political career. 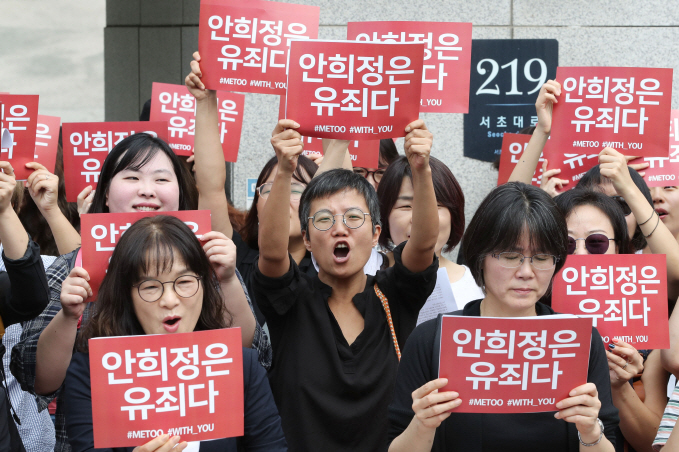 Women rights groups and civic groups hold a press conference at the Supreme Court on Sept. 9, 2019 following the top court’s ruling that reaffirmed An’s sentence. People are seen holding red signs that say “An Hee-jung is guilty” in Korean. (Yonhap)

Kim’s attorneys and women rights groups welcomed Monday’s decision in a press conference at the Supreme Court following the ruling.

“The supreme court’s decision became more important as the conclusion of the first and second rulings were different. Today the Supreme Court gave an answer that … the defendant’s action clearly constitutes a crime,” said Jung Hye-sun, one of the attorneys representing Kim.

“We are very happy that the case has been closed,” she said.

Kim, the plaintiff, thanked the jury and pledged to stand up for sexual violence victims.

“I earnestly ask you to release me from false accusations. I will stand by sexual violence victims who are holding their breath in all corners of the world,” she said in a statement.

“There are still victims who are not able to speak up due to fear. This ruling should be the beginning to ending sexual violence affected by hierarchies,” said main opposition Liberty Korea Party spokesman Lee Chang-soo.

An is one of the most powerful figures to be implicated in a MeToo case here.

South Korea’s MeToo movement kicked off in January 2018, when state prosecutor Seo Ji-hyun, in a televised interview, accused a senior colleague of repeatedly groping her.