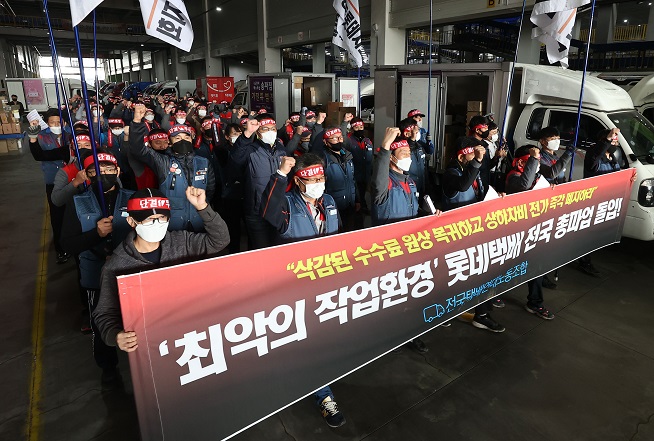 The unionized workers launched a nationwide strike Tuesday demanding better treatment following a series of deaths of their colleagues, apparently from overwork.

“We have decided to end the strike since a tentative agreement was reached during today’s consultation between the union and management,” said a solidarity union of parcel delivery workers, which represented Lotte couriers in the negotiations.

The proposed agreement addressed the union’s key demands, including an increase in payments per delivery, the group said. Union members approved the deal in a subsequent vote.

About 250 workers in Seoul, Gwangju and other cities, participated in the walkout. They account for some 2.5 percent of the total couriers working for the company. They will return to work by Saturday, the union said.

Logistics companies have scrambled to announce measures to improve working conditions for deliverymen amid a public outcry over the deaths of at least 14 workers this year, apparently due to overwork.

The strain on workers comes as the coronavirus pandemic has fueled online shopping and increased demand for home deliveries.

Lotte announced Monday it will add 1,000 more workers in phases to sort parcels, adjust the volume of deliveries per worker based on expert recommendations, and require outlets to provide workers with insurance for industrial accidents.