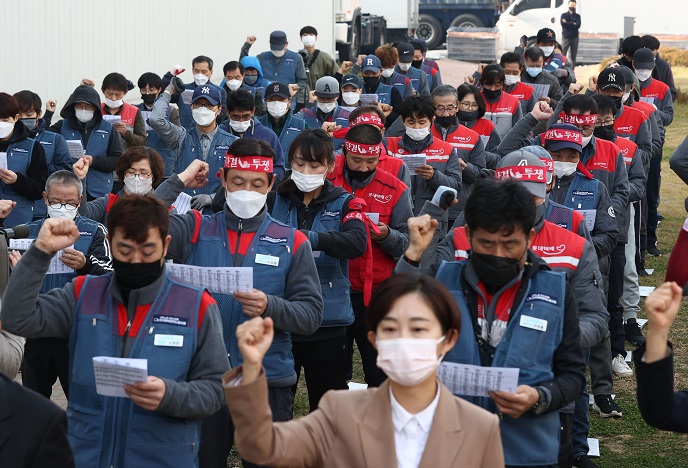 This photo shows delivery workers launching a strike at a distribution center in southeastern Seoul on Oct. 27, 2020. (Yonhap)

The workers announced the strike at a distribution center in southeastern Seoul, saying they will be joined by around 250 colleagues across the nation in Seoul, Gyeonggi Province, Gwangju, Ulsan and South Gyeongsang Province.

“Lotte Global Logistics has made enormous profits thanks to increased delivery volumes caused by the COVID-19 pandemic, but the treatment of delivery workers is worsening,” a member of a trade union representing workers at Lotte and other logistics companies said.

“The company, which carries all responsibility and authority, must resolve the situation,” he said.

The workers laid out six demands, including the restoration of their payments per delivery to previous levels, easing the burden of sorting parcels and recognition of their trade union.

A Lotte official said the company does not expect the strike to seriously disrupt deliveries.

“We will make sure there are no disruptions to deliveries by adjusting the number of workers assigned to each zone,” the official said, adding that the striking workers account for only 2.5 percent of the total workforce.

The official also denied that Lotte has lowered payments per delivery, saying the union was referring to a reduction in subsidies the companies used to provide to certain delivery outlets following the increase in delivery volumes.

Logistics companies have scrambled to announce measures to improve working conditions for deliverymen amid a public outcry over the deaths of at least 13 workers this year, apparently due to overwork.

The strain on workers comes as the coronavirus pandemic has fueled online shopping and increased demand for home deliveries.

Lotte announced Monday it will add 1,000 more workers in phases to sort parcels, adjust the volume of deliveries per worker based on expert recommendations, and require outlets to provide workers with insurance for industrial accidents.

Hanjin Transportation also announced the suspension of deliveries after 10 p.m. starting next month.

Last week, industry leader CJ Logistics said it will hire 4,000 more workers in phases to handle only the sorting of parcels and set an appropriate daily workload based on expert recommendations.

“The details (of the bill) have almost been finalized, so I will have it passed this (parliamentary) session,” he said.