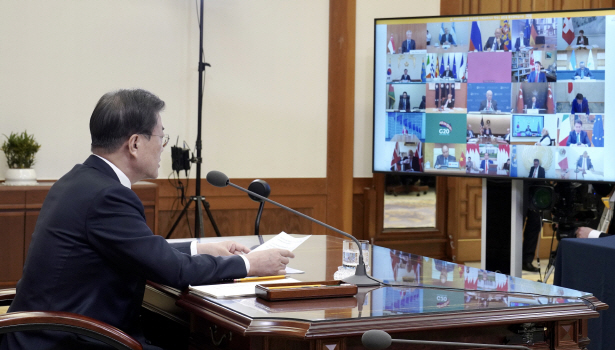 Over the past several weeks, he has received lots of phone calls from global leaders seeking his quarantine advice or the supply of medical devices, especially test kits.

Many view it as a diplomatic boon for Seoul amid the public health and economic crisis, which has ironically helped enhance its global reputation and stature.

South Korea has become a model for handling COVID-19. A slew of foreign media took heed of Moon’s crisis management highlighted by the quick release of transparent virus-related information.

His approval ratings at home have gone up, multiple polls showed.

This time, his popularity abroad is about anti-virus measures, not his signature Korean Peninsula peace initiative.

Moon engaged in 17 rounds of phone talks with foreign leaders for the past 32 days except for weekends, according to Cheong Wa Dae’s deputy spokesman Yoon Jae-kwan.

It means holding phone talks once every two business days.

“Behind the frequent telephone summits were a demand for global solidarity in response to COVID-19, a desire to share South Korea’s quarantine experience and acquire its testing kits and other medical devices,” he told reporters.

Another presidential official said Moon is scheduled to continue the phone diplomacy next week. 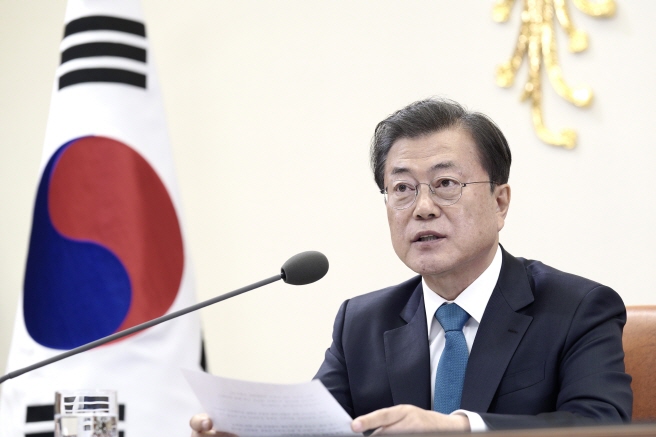 President Moon Jae-in speaks with other leaders of major industrialized and developing economies during the Group of 20 special teleconference summit, at Cheong Wa Dae in Seoul, on March 26, 2020. (image: Cheong Wa Dae)

Moon kicked off his coronavirus phone summit diplomacy with a call with Chinese President Xi Jinping on Feb. 20. They agreed to join forces in the fight with the highly contagious disease.

Moon replaced visits to the United Arab Emirates (UAE), Egypt and Turkey, slated for mid-March, with phone talks with their leaders.

Speaking with Moon by phone on March 13, French President Emmanuel Macron expressed his “respect” for what Moon’s government has done against the virus.

Moon floated the idea of South Korea, France and other Group of 20 (G-20) members convening a special video conference.

Moon then made a formal proposal during a separate phone discussion with Crown Prince Mohammed bin Salman of Saudi Arabia, which chairs this year’s G-20 sessions.

Three South Korean firms gained preliminary FDA approval for the sale of their products, the Ministry of Foreign Affairs said.

The ministry also announced meaningful progress in the allies’ drawn-out negotiations on defense cost-sharing, spawning media speculation that the Moon-Trump phone summit might have affected the mood of the bargaining.

In addition, Moon had a series of phone conversations with his Swedish, Spanish, Canadian, Lithuanian, Ethiopian, Bulgarian, Colombian and Danish counterparts.

They appreciated South Korea’s anti-coronavirus strategy and appealed for coordination on their measures. 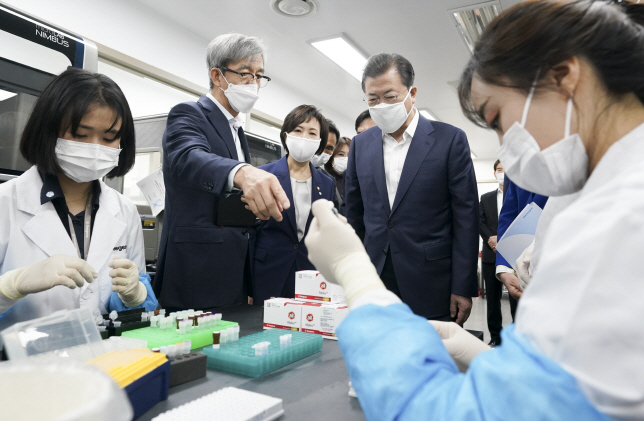 Cheong Wa Dae said it is pushing for a teleconference of the ASEAN Plus Three club, which comprises 10 Southeast Asian nations, South Korea, China and Japan.

It would enable Moon and Prime Minister Shinzo Abe to consult directly on responding to the pandemic.

In 2018, Moon agreed to set up a telephone hotline with North Korean leader Kim Jong-un. But it’s apparently nonoperational, with no news of their phone talks.

Moon’s aides said the president won’t hesitate to pick up the phone on his desk should Kim dial Cheong Wa Dae’s number.