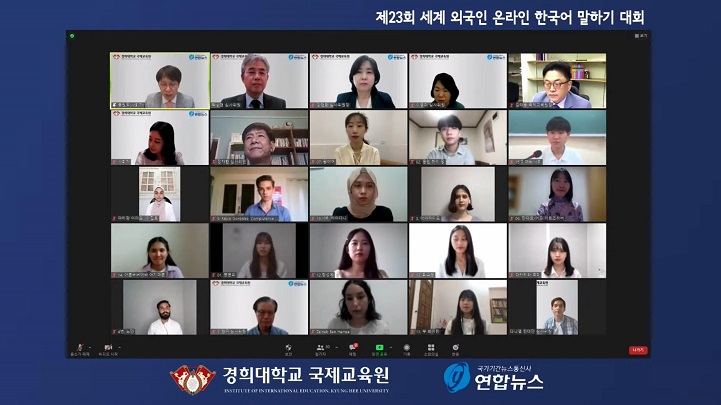 Seen in the photo are contestants of the 23rd World Korean Language Speech Contest for Foreigners. (Yonhap)

Zeynep Ben Hamza, a 21-year-old contestant from Tunisia and the winner of a Korean speech contest held at the Korean embassy in Tunisia, is a speaker of five languages.

“I began to take interest in the Korean language since I was a teenager with K-pop,” he said.

“I never expected that I’d be so hooked to the Korean language.”

“I learned five languages including English, Chinese, and German when I was young,” said Lai Chao-Jung, a 27-year-old contestant from Taiwan.

“Now my friend challenged me to learn Korean.”

Lai’s passion for Korea, too, stood out as she has visited Korea on many occasions, and even joined a study abroad program in the country.

“I began to study the Korean language because I wanted to enjoy Korean variety shows without subtitles,” said Rahmadani Sahri, a 27-year-old contestant from Indonesia who is currently studying electronic engineering at Kyung Hee University.

“I began listening to K-pop in 2013, and made Korean friends,” said Fabio Brais Gonzales Prieto, a 22-year-old contestant from Madrid, Spain.

“I fell in love with the Korean language the more I learned about Korean culture and customs.”