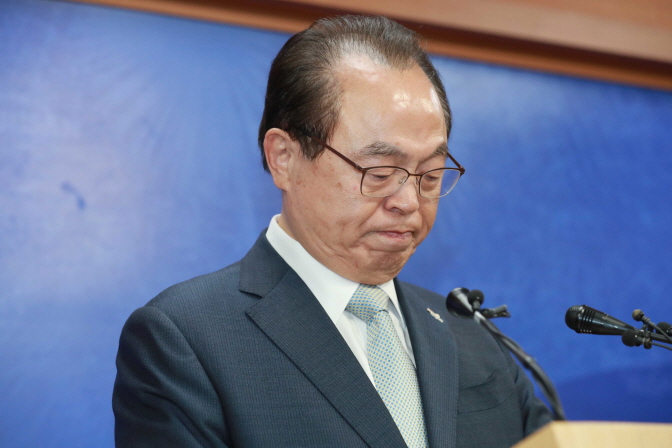 “In a short meeting that lasted five minutes, there was unnecessary physical contact with a person. I realized that this could be recognized as an indecent assault, (something) that should not have been done,” the city’s Mayor Oh Keo-don said in a press briefing.

“As a public servant who takes responsibility, I will live my remaining life repenting and taking responsibility for this mistake,” the mayor said as he cried. “I’m at fault for everything.”

Oh reportedly touched a female civil servant inappropriately during a recent meeting at his office.

A counseling center for sexual crime victims in Busan said the person reported the case involving “serious molestation” in mid-April.

The center asked Oh’s aides to verify the details, who acknowledged the case and agreed to meet any demands.

The victim asked Oh to step down by April and address his reason for resignation, the center said, adding that the person didn’t want the case to be used politically.

In a statement released by the center, the victim said, “The utterly unexpected incident completely rattled my life” as “a hard-working, average employee.”

The person raised concerns over parts of Oh’s press conference, saying phrases such as “I realized that this could be recognized as an indecent assault” may make the victim appear to be making a big deal.

The victim denied suspicions that the timing of the mayor’s resignation was adjusted to not affect the April 15 general elections, saying “There was no pressure or appeasement from the political circle at all.”

The municipal assembly of Busan said it has received his resignation letter, which has immediately gone into effect according to assembly rules.

Oh, who ran as a candidate for the ruling party, was elected as the mayor of Busan, 453 kilometers southeast of Seoul, in the 2018 gubernatorial elections.

The mayoral post will be temporarily filled by the city’s vice mayor for administrative affairs until the by-election scheduled for April 2021.

His political aides are also expected to resign.

The Democratic Party issued an apology, saying they plan to remove him from the party following relevant procedures.

“We deeply apologize to the citizens over Oh resigning midterm due to a disgraceful case,” Rep. Yun Ho-jung, the party’s secretary-general, said. “We feel sorry to the people of Busan for the inevitable vacuum in Busan’s city affairs.”

Yun said the party will “take all possible measures to lessen the victim’s pain” and review preventive measures against such cases.

An official at the party’s ethics committee said it will convene a meeting as soon as possible and take disciplinary action by early next week, at the latest.

Police have launched a preliminary probe into the case.