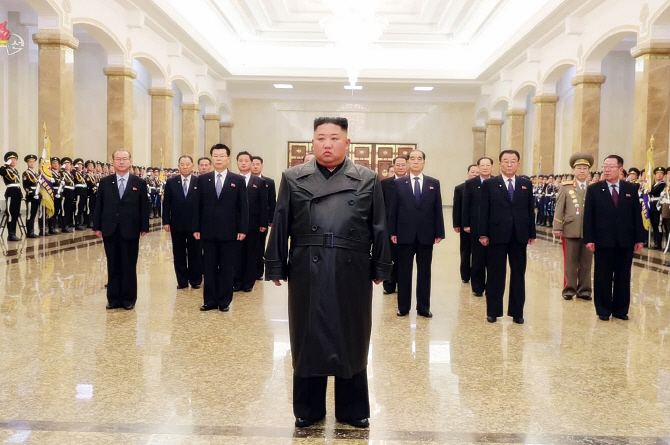 North Korea’s leader Kim Jong-un (C) pays tribute to his late father and former leader, Kim Jong-il, at the Kumsusan Palace of the Sun, in this image captured from the North’s Korean Central TV Broadcasting Station on Feb. 16, 2020. (Yonhap)

SEOUL, April 26 (Korea Bizwire) — North Korea’s state media reported on leader Kim Jong-un expressing his “appreciation” for people working to build facilities in a northern border town Sunday but continued to stay silent about his public activities for two weeks amid growing rumors about his health.

“Workers are in burning passion to earnestly contribute to the construction of a socialist powerhouse without forgetting about the party’s trust and expectation for any moment.”

Samjiyon is located at the foot of Mount Paekdu, the highest peak on the Korean Peninsula, known to be the birthplace of Kim’s late father and former leader Kim Jong-il. It was elevated to a city late last year.

It, however, did not provide other details that could provide clues about his whereabouts or health conditions.

Other state media, including the Korean Central News Agency and the Rodong Sinmun, did not report on Kim’s public activities either, nor did they provide any photos of the leader.

Kim has been out of public view since he was last seen on April 11 chairing a major party meeting.

He skipped an important annual trip to the Kumsusan Palace of the Sun on the occasion of the April 15 birthday of the late state founder and his grandfather, Kim Il-sung, sparking rumors over what was behind his unprecedented no-show at the mausoleum.

CNN intensified speculation about his health by reporting earlier this week that the United States is looking into intelligence that Kim is “in grave danger” after surgery, but Seoul and Washington officials have disputed the report.

It is not rare for Kim to disappear from the public view but whenever it happens, rumors spread about his health, with most of the cases having proved to be false.

He reemerged after about a three-week absence by visiting the mausoleum to mark his late father’s birthday on Feb. 15.