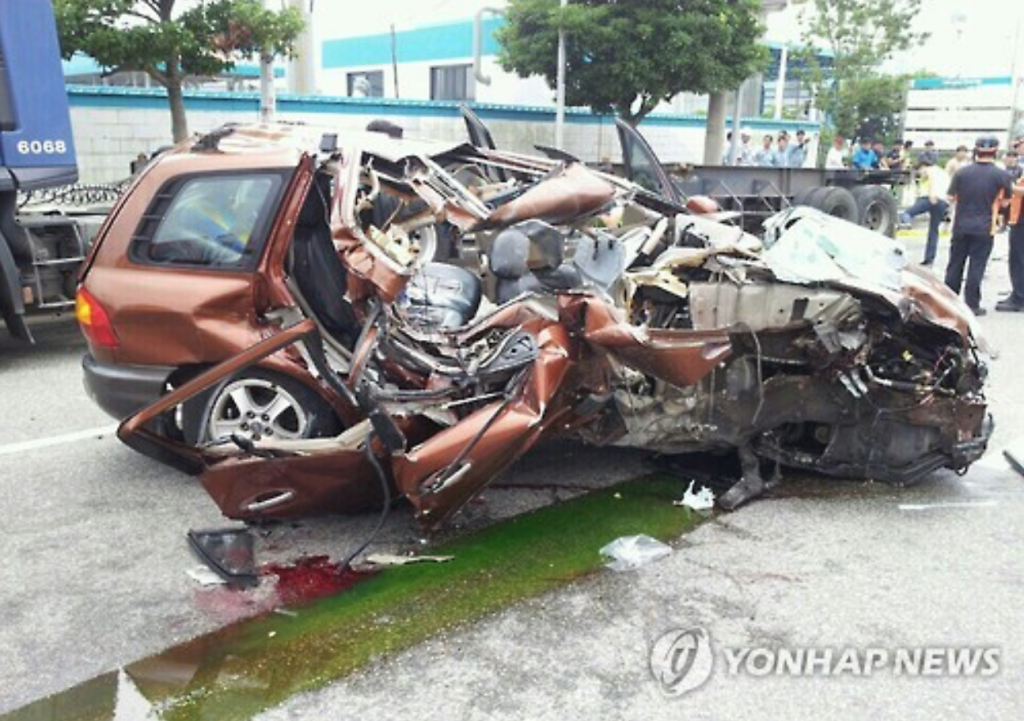 Hyundai vehicles have long been criticized for numerous sudden unintended acceleration accidents. According to data provided by the Transportation Safety Authority, 212 Hyundai vehicles were involved in such accidents from January 2010 to July 2015, accounting for 44 percent of all related accidents (domestic vehicles only). (image: Yonhap)

Seconds later, the situation quickly deteriorates. An intersection appears, and the light is clearly red. But the car is not slowing down, and instead is actually accelerating. “The baby, the baby, the baby,” a woman cries in a desperate voice, amid panic and chaos. The car makes a quick left turn at the intersection, narrowly misses a bystander, but fails to avoid the back of a parked trailer.

Four people were killed in the tragic accident. Only the 64-year-old driver survived, albeit with serious injuries. His 60-year-old wife and 33-year-old daughter were both killed. And so were his two grandsons, aged three and three months, the ones that the family so desperately struggled to protect. The family was on its way to the beach for a summer retreat.

The vehicle involved in the accident was a Hyundai SUV, the first generation Santa Fe from 2002. According to the investigative authorities, they’re looking at all possibilities when it comes to determining the cause of the crash.

“We’ll focus our initial investigation solely on the vehicle itself,” said an official from the Ministry of Land, Infrastructure and Transport. “However, if we determine that it’s a manufacturing flaw that may affect similar vehicle models, we will consider additional investigative steps and potential recall measures.”

Driver error and an incident of sudden unintended acceleration are both being considered, while the Busan Nambu Police Precinct is also investigating the driver of the trailer for illegal parking.

Amid the ongoing investigation, posters on online communities are already claiming that it was vehicle malfunction that brought about the tragedy. In fact, the first generation Santa Fe has been the subject of numerous complaints about fuel leakage and steering mechanism failure from a malfunctioning high-pressure pump.

The sole survivor of the crash also testified to the police that the “car’s brakes were not functioning”.

Hyundai vehicles have long been criticized for numerous sudden unintended acceleration accidents. According to data provided by the Transportation Safety Authority, 212 Hyundai vehicles were involved in such accidents from January 2010 to July 2015, accounting for 44 percent of all related accidents (domestic vehicles only). Hyundai’s sister company Kia Motors ranked second behind Hyundai with 78 similar accidents.

“Thousands of parts go into a single vehicle, and if important parts like a high pressure pump start failing, the vehicle becomes extremely difficult to control,” said an automotive industry official. “It’s not just safety belts and airbags that are related to vehicle safety, which is why manufacturers and the government need to take a closer look at car parts that are closely related to safety.”

“My son’s father-in-law was a taxi driver for years, and there’s no way he would have caused such an absurd accident,” said the deceased babies’ grandmother (father’s side) in an interview with the Busan Daily. “The accident shattered a blissful family, and authorities need to conduct a thorough investigation to find the fundamental cause of the incident.”