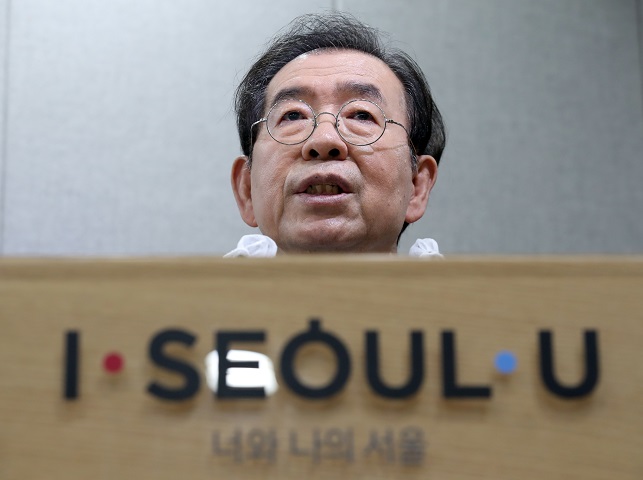 A police search team found his body in the forested hills of Mount Bugak near his official residence, one minute after midnight. He is presumed to have died of suicide.

Police plan to investigate the exact cause of his death.

Park, 64, had reportedly faced a probe into allegations of sexual harassment against a former female secretary.

She filed a formal complaint with the police on Wednesday over unwanted “physical contact” and “inappropriate” messages from Park, according to sources.

“A complaint has been received by the Seoul Metropolitan Police Agency,” a police official said on condition of anonymity, declining to elaborate on an ongoing investigation.

“(The body) did not show particular signs of homicide,” the official said, noting that an investigation will be conducted in accordance with procedures for a suicide.

Park’s daughter filed a police report at 5:17 p.m. Thursday that he “had left home four to five hours ago” after leaving a message that sounded like a will and his phone was turned off.

The note, which was found at his desk in the study and made public by his chief secretary on Friday, carried a short message.

“I’m sorry to everyone. I thank everyone who has been with me in my life. I remain always sorry to my family, to whom I’ve given only pain. Please cremate (my body) and scatter (the ashes) at my parent’s grave. Goodbye everyone,” it read.

Park left his residence in the central Seoul ward of Jongno at around 10:44 a.m., wearing a black hat, a dark jacket, black pants, gray shoes and carrying a black backpack.

CCTV footage showed him arriving by taxi at Waryong Park in a hilly neighborhood in Jongno at 10:53 a.m.

Shortly after receiving the report of him missing, police officers launched a massive search operation around the area involving hundreds of officers, drones and sniffer dogs.

The body was found near a bag, a water bottle, a cell phone, writing utensils and Park’s own business card.

At 3:30 a.m., the body was placed in the morgue of Seoul National University Hospital in the same ward. 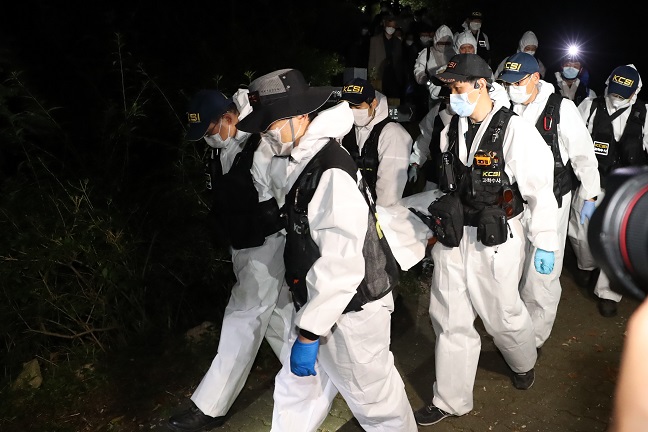 Police scientific investigation team members carry the body of Seoul Mayor Park Won-soon, who was found dead in the forested hills of Mount Bukak in Seoul on July 10, 2020. (Yonhap)

Police have launched a probe into Park’s death. While there are no signs of foul play, police plan to look into his mobile phone history and itinerary to identify anything that appears suspicious.

Police also plan to consult Park’s family on whether to conduct an autopsy.

Park, a member of the ruling Democratic Party, had served as mayor of Seoul since 2011 and he was regarded as a potential candidate to run for the 2022 presidential elections.

He was once a human rights lawyer and civic activist. Park had two more years in office. By law, Seo Jeong-hyup, first vice mayor for administrative affairs, will serve as acting mayor until the by-election slated for April 7, 2021.

“We pray for the soul of the deceased and extend our deepest condolences to the citizens (of Seoul). City affairs will firmly continue according to Mayor Park Won-soon’s values that prioritized stability and welfare,” Vice Mayor for Administrative Affairs Seo Jeong-hyup said in sorrow during the city’s first press briefing following Park’s death.