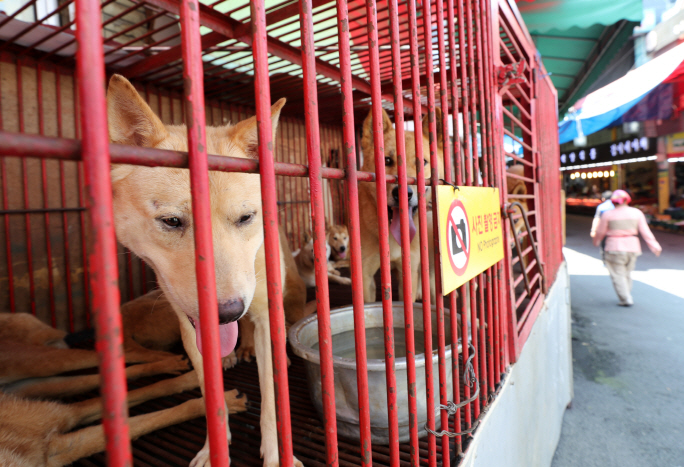 Gupo Dog Meat Market in Busan was shut down last July by mutual agreement, and most of the dogs that used to be locked up in the market were sent out for adoption to find new families through animal agencies. (Yonhap)

SEOUL, Oct. 25 (Korea Bizwire) — Seoul’s last surviving dog slaughterhouses have finally been shut down after constant pressure from the mayor.

The result comes after a year and two months of crackdowns, pressure, and convincing by the Seoul Metropolitan Government.

The city announced on Thursday that the last three dog slaughterhouses in downtown Seoul have been shut down. These slaughterhouses had been killing dogs in back alleys, and disposing of the remains in a nearby stream.

It was the city’s Special Judicial Police Squad that first found them in August of last year, when a concerned citizen reported the slaughterhouses to the team.

During the investigation, the city also found out that slaughterhouses existed in areas outside of traditional markets, which authorities thought of as the only place where slaughterhouses would operate.

The remaining slaughterhouses have all been shut down just eight months after Park’s announcement. They signed an indemnity report to halt all operations and began to carry out their vows at the beginning of October.

Despite requests from slaughterhouse owners to give them some time to gradually wind down their operations, city officials encouraged them to take quick action, arguing that Seoul is a symbol of South Korea, with wide exposure to visitors from around the world.

Many slaughterhouse owners either shut down their business or decided to purchase dog meat from other regions instead of engaging in slaughter work themselves.

10 thoughts on “Seoul City Shuts Down All Remaining Dog Slaughterhouses”