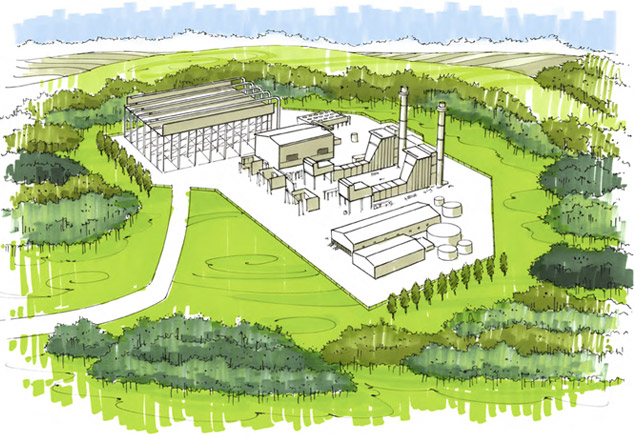 Located in northeastern Ohio, Carroll County Energy will be a state-of-the-art 700-megawatt combined-cycle natural gas electric generating facility that will sell energy, capacity and ancillary services into the PJM market. The project is proximate to the Utica and Marcellus natural gas production, as well as AEP’s 345 kV transmission lines and Kinder Morgan’s Tennessee Gas Pipeline system. This strategic location is an important competitive advantage of Carroll County Energy.

The facility will feature two GE 7F.05 gas turbines and a D602 steam turbine which have the capacity to generate electricity for approximately 750,000 homes. Bechtel is building the project under a turnkey construction contract. EthosEnergy will operate the facility and Advanced Power will remain as the construction and asset manager.

“The project has received strong support from Carroll County and other key stakeholders in Ohio,” said Advanced Power CEO Thomas Spang. “From the beginning it was the project’s goal to work closely with the community and to bring in the strongest partners in the industry — this milestone demonstrates the success of that strategy.” Carroll County Energy is one of a number of projects Advanced Power is developing in the U.S. and Europe.

“We are pleased to take part in another significant energy project as part of our growing relationship with Advanced Power,” said Marietta Moshiashvili, Managing Director and Head of Natural Resources and Infrastructure Originations at TIAA-CREF.

“As we pursue a steady, diversified stream of returns on behalf of our investors, this project represents exactly the type of opportunity our dedicated energy infrastructure team actively seeks out,” said Mario Maselli, Senior Director within the Energy & Infrastructure Investments team at TIAA-CREF. “A strong management team, consistent long term returns and a positive economic impact are important criteria in our investment decision making process.”

Approximately 700 construction jobs will be created during peak construction as well as 20 to 30 permanent jobs during operation. In addition to economic, socioeconomic and environmental benefits, the project will provide critical electric generation capacity in a region that has experienced significant facility retirements.

Advanced Power is a privately owned company established in 2000 to develop independent power projects in North America and Europe. Advanced Power’s experienced management team has led more than 9,400 MW of generating project development. Majority-owned by senior management, Advanced Power has offices in Boston and London and is headquartered in Zug, Switzerland.